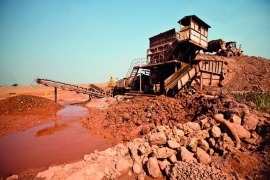 The Angolan diamond sector might put an end to semi-industrial mining, aiming to provide more competitiveness, transparency and efficiency to the activities in the sector, said José Manuel Augusto Ganga Júnior, president of Endiama's board of directors. Endiama is Angola’s national diamond prospecting, exploration, cutting and marketing company. Summing up the sector’s activities in 2019, he said the aim was to bring an end to semi-industrial exploration and keep only industrial operations, regardless of whether they are run by large or small cooperatives. The country established 16 diamond-mining cooperatives in February 2019 with the express intention that they evolve to industrial companies within two years and upon entering the production phase. The goal was to make better use of mineral resources for the benefit of the population, increasing state revenues, generating more jobs and discouraging illegal mining.

The head of Endiama's board emphasized that the idea is for companies to comply with the requirements set out in the approved regulation, namely in relation to the rules of exploitation, environmental protection, marketing, taxes and social support to the community. He said he hopes that this measure will contribute to the promotion and creation of more jobs, help decrease imports and boost exports and, consequently, the collection of foreign exchange for the country. He further noted that the mining sector could contribute much more to the country's growth and sustainable development and also underlined the focus on increasing geological knowledge and training of personnel for the sector.

“We have been working with the main diamond companies in the world, in order to add more value to the sector and, consequently, make the country the third-largest diamond producer and cutter in the world, taking into account the potential of the sector,” Júnior was quoted by the Angop news agency. The company also intends to improve existing mining operations to create an Endiama-only production chain, although much work remains to be done, the director stressed.

According to news outlet Africa 21, only ten of the 244 licensed diamond cooperatives in Angola are currently producing, according to data released by Ana Feijó, administrator of the geology and mining development of Endiama, who presented a report on the activities of artisanal and semi-industrial diamond mining cooperatives at the 1st Meeting of the National Cooperative of Diamonds. According to Ana Feijó, the cooperatives of artisanal and semi-industrial exploitation should evolve to industrial companies within two years and upon entering the production phase. The creation of the cooperatives aimed to create conditions for integrating artisanal miners into semi-industrial diamond mining cooperatives, with a view to making better use of mineral resources for the benefit of the population, increasing state revenues, generating more jobs and discouraging illegal mining.

In September 2018, as part of Operation Transparency, aimed at combating illegal emigration and illicit diamond trafficking, artisanal and semi-industrial diamond exploration was completely suspended. The activity was only restarted in February 2019, with the implementation of 16 cooperatives, in a first phase, making a total of 20 mining concessions. These were later joined by another 244 cooperatives to which 248 mining concessions were granted, but 234 of these entities are inoperative and only ten are producing. Between February and October, these cooperatives produced around 24,765 carats of diamonds, sold at an average price of $64, for a total of $1.7 million.

According to the country's mining code, only Angolan citizens or legal persons whose share capital is majority-held (two-thirds) by Angolan citizens may be awarded mineral rights for semi-industrial mining of diamonds.

Angolan law does not require the participation of local partners in mineral concessions, therefore, both foreign and local mining companies (owned by Angolan nationals) may be awarded concessions and engage in the exploration and mining of minerals. The national concessionaires (Endiama EP and Ferrangol EP) may partner with local or foreign entities in connection with mineral projects, as members of unincorporated joint ventures set up for the exploration stage and as shareholders of the companies incorporated for the mining stage.

The award of mineral mining and marketing rights entitles the state to participate in mining concessions. Other than that, there are no industry-specific rules or restrictions on corporate structures, nor are there mandatory participations or ownership interests reserved for national associates. However, preference is to be given to national partners or companies when setting up a business partnership.