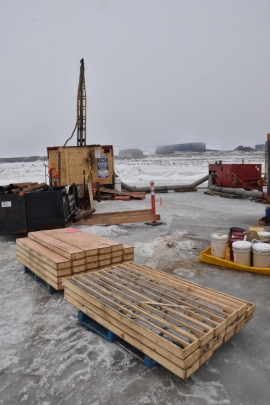 De Beers is moving to expand exploration at its Gahcho Kué diamond mine, while Dominion Diamond Mines (DDM) is looking to expand a major exploration program east of Ekati mine, according to several Canadian news outlets. In a Dec. 31 submission to the Mackenzie Valley Land and Water Board, De Beers indicated it would be exploring 11 targets of interest by late February. Split into two phases, the program will cost roughly $2.88 million, according to the submission. DDM applied to the same board to amend a permit and licence it received more than two years ago for exploration work on its Glowworm Lake block of claims.

Canadian outlet Northern News Services cites De Beers spokesperson Terry Kruger as saying the program represented a continuation of recent years’ brownfield exploration at the site. Ultimately, he said, a successful program “could potentially lead to extending the life of operations – to put more carats into the mine plan.” The results of the drilling will not be finalized for several months, which currently rules out speculation on the program’s possible impacts on Gahcho Kué’s mine life. The move follows recent hints that De Beers could potentially expand mine life at Gahcho Kué, which is expected to produce an average of 4.5 million carats per year (100%) over an initial 12-year lifespan.  Production during the first five years (2017 to 2021) is expected to average 5.4 million carats annually.

Those hints came via an announcement from De Beers' 49% partner in Gacho Kué, Mountain Province, which released additional microdiamond and delineation results for a recently discovered kimberlite at the diamond mine in the Northwest Territories. Back in June, 2019, Mountain Province announced the discovery of the “Wilson” kimberlite on the Gahcho Kue property - named after Alice Evelyn Wilson (1881-1964), who is officially recognized as Canada’s first female geologist. Based on the first 18 drill holes, the company estimated a potential range of 1.5-3.0 million tonnes of kimberlite material. No grade estimates were provided when the discovery was announced, but an initial microdiamond analysis on a small 115-kilogram sample yielded 480 diamonds, including an 0.28 carat colorless octahedral aggregate, the company said. The company recently said a total of 1.7 tonnes of kimberlite recovered from two drill holes at Wilson yielded a total of 5,564 diamonds recovered in the +0.075-millimetre size classes, including 86 +0.85 millimetre diamonds weighing a total of 2.23 carats.

“These results, that follow on the discovery of Wilson earlier this year, are evidence that the life of Gahcho Kue Mine is still an open-ended opportunity,” said Mountain Province President and CEO Stuart Brown.  “Wilson has the potential to make a valuable contribution to the mine, and it represents only the early results of our combined exploration efforts with De Beers to continue to add value through further discovery in the area,” he said.

Dominion Diamond Mines is looking to expand a major exploration program east of Ekati mine, writes CBC News. With a total area of 1,400 square kilometres, the block is 380 kilometres east northeast of Yellowknife and overlaps the N.W.T.-Nunavut border. Dominion wants to be allowed to do enough drilling and blasting to take up to 1,200 tonnes of bulk samples each year. It also wants permission to build winter roads within the claim block, add additional exploration camps and include four more claims to the exploration area. If Dominion carries out an expansion at Ekati, the mine is slated to be in production into the 2030s. In 2018, however, Dominion Mines delayed the Jay Pipe expansion that would potentially expand mine life.

CBC News writes, "With a 40 percent stake in the Diavik diamond mine and a 90 percent stake in Ekati, Dominion is the most active N.W.T. diamond miner. But," they add, "it is also the least public, since being bought by the privately-held Washington Companies two and a half years ago for $1.2 billion."

Image: A drill rig sits at Gahcho Kué Mine as part of a brownfield drill program in April 2019. In the foreground, the boxes contain some of the drill core recovered as part of this program, according to De Beers spokesperson Terry Kruger.