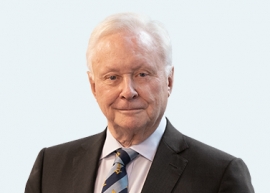 Petra Diamonds, a leading independent diamond mining group, on Tuesday announced it had appointed a successor to the miner's founder and chairman, Adonis Pouroulis: the company has named mining engineer Peter Hill as nonexecutive director and chairman-designate effective January 1, 2019. He will take over as Non-Executive Chairman on 31 March 2020, at which time Pouroulis, who founded Petra in 1997 and has been its chairman ever since, will step down. The company recently eliminated the role of chief operating officer because of a management restructuring.

Peter Hill is currently Non-Executive Chairman of the world's largest geotechnical contractor Keller Group plc, and of the leading European and Australasian building products company Volution Group. In addition to having extensive Board experience, Hill began his career at Anglo American and then worked for Rio Tinto at a uranium operation in Namibia where he held mine planning and open pit supervisory positions. Pouroulis said that Hill "brings an impressive track record of Chairmanships and Board memberships across a range of global companies, industries and organizations, built on his earlier career in the mining industry including in Southern Africa, in underground and open pit operations, in planning and in project evaluation and development, in mining finance and as a CEO." Pouroulis led Petra through a period of growth, eventually becoming one of the world's top five independent diamond producers, operating three underground mines in South Africa (Finsch, Cullinan and Koffiefontein) and one open pit mine in Tanzania (Williamson).

Petra Diamonds early this year appointed experienced mining vet Richard Duffy as the new CEO of the company, which has seen its debt pile up amid expansion efforts and watched its shares tumble in recent months. CEO Johan Dippenaar announced his departure last September after 12 years at the helm.