Bunder Diamond Mine in India has New Owner 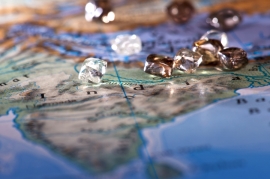 The Bunder Diamond Mine, located in Chhattarpur district of Madhya Pradesh, India, has been sold to Essel Mining, a company owned by the Aditya Birla Group, which will acquire mining rights with a 50-year government lease. The Bunder mine is estimated to have reserves of about 34 million carats.

Rio Tinto the future diamond project in 2004 and developed the Bunder diamond mine about a decade ago but it has never really gotten off the ground. The deposit is located in rural India, about 800 kilometres southeast of New Delhi and is the most important diamond discovery in India in the last 40 years. Rio Tinto was set to start production by 2016 or early 2017 with the hopes of having a world-class mine, producing between two to three million carats a year. It was to turn Madhya Pradesh, where the mine project is located, into one of the leading diamond producing regions in terms of value and volume, but the project faced a series of environmental issues, permissions were delayed and the project stalled.

In August 2016, following a comprehensive review, Rio Tinto announced it would not proceed with the development of Bunder due to commercial considerations and would be seeking to close all project infrastructure. The company gifted the project to the Government of Madhya Pradesh in January 2017, with the Government accepting ownership responsibility for the Bunder assets. The inventory of assets and associated infrastructure handed over to the government comprises all land, plant, equipment and vehicles at the Bunder project site. The inventory also included diamond samples recovered during exploration. This approach was designed to assist the government to package the assets if it were to proceed with an auction process for the Bunder mineral rights, which it has now completed.

The bidding process was conducted online and according to reports, five large industrial companies participated. The highest bidder has now to deposit a sum of 10% of the performance guarantee amount and then it will receive the Letter of Intent to proceed. Whether the environmental issues have somehow been resolved during the last three years of inactivity at the site is unclear.