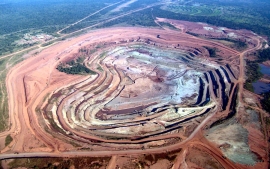 Russian diamond miner Alrosa said on Wednesday that it planned to start trial mining at a new section of its Luaxe deposit in Angola by mid-2020. Luaxe is Angola's newest and largest diamond deposit, as well as one of the few major diamond mines to be developed in the past decade. Trial mining could produce 1 million carats of diamonds worth $90 million in 2020, Russian diamond producer Alrosa said at a workshop last week with the industry’s largest banks and non-bank financial institutions, which discussed the latest trends and developments in the diamond industry.

The Russian miner and its partner Catoca Mining - Angola’s state-owned diamond company - found discovered Luaxe’s Luele pipe in 2013. The geological research points to reserves evaluated at 350 million carats and a mining lifespan of 30 years, with the potential to produce over 10M carats annually for an estimated value of $35 billion. It now looks as if production could commence by the end of the decade as they had originally planned. Catoca has spent $200 million studying and developing it further and has said the pipe may turn out to be the largest discovery in the industry in 60 years. “It will be one of the largest deposits in the world,” Vladimir Marchenko, Alrosa’s deputy chief executive in charge of its Africa business, told Reuters.

In November, Alrosa’s specialists finished reviewing a sample of Luaxe’s ore containing 45,000 carats of diamonds. This data will be used to complete the reserves audit, he said. The pre-feasibility study is yet to come, and the scale of Luaxe’s future production will depend on the project’s economics and global demand. Considering the size of the ore body and preliminary exploration data, however, the development of Luele will be of great economic interest for project participants. Alrosa spent $70 million last year to increase their stake in Angola’s diamond company from 32.8% to 41%, solidifying their access to a production base outside Russia.

Alrosa has said that the rough and polished diamond market is starting to show "the first signs of stabilisation. In Q3 2019, global jewelry demand received some support for the first time in a year, primarily thanks to consumers from the US market. The Company’s data also shows that in October and November prices for a variety of diamond products edged higher, with prospects for destocking now more visible. At the same time, the participants believe that a more accurate assessment of the industry can only be made based on sales volumes in the festive winter season, as they will show if the current upward trend is here to stay."