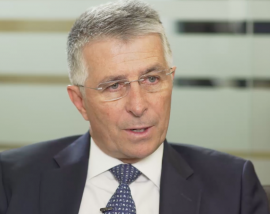 Gem Diamonds unearthed a 93.5 carat top-quality white Type IIa diamond from its Letšeng mine in Lesotho on 30 November 2019, which followed the recovery of two diamonds weighing more than 100 carats earlier in the month: a 120-carat, high-quality, white, type IIa diamond and a 125-carat, low-quality stone. In a recent meeting of shareholders, however, a significant number - nearly 25 percent - voted against reelecting CEO Clifford Elphick to the company’s board in an effort to force approval of share buybacks and dividends.

The miner explained that its dividend policy depends on the results of "the group's operations, its financial condition, cash requirements, future prospects, profits available for distribution and other factors deemed to be relevant." They explained that, "The present position of the diamond market and the need to maintain appropriate levels of cash reserves, were key factors in the board's current approach to these share capital matters." Although Elphick’s reelction passed, the miner spoke addressed the shareholders' concerns. “We understand that the significant votes received against the two directors [including Harry Kenyon-Slaney] [are] principally related to the board’s approach on share buybacks, dividends and board composition." Gem noted its dividend policy will be regularly reviewed. Shares in Gem Diamonds fell 8% Friday following the announcement, sending the stock to its lowest point this year.

In a recent interview, CEO Elphick discussed the "interesting" year 2019 has been, emphasizing that diamond prices have "picked up from unprecedented low levels", which he hopes is the beginning of a turnaround in the market. He stated that for several years, the industry has been speaking about a nascent supply and demand gap, but that is "now happening" and prices should start reflecting the fact that demand is higher than supply. He also noted that the company is making strong progress in their effort to reduce their expenditures by $100 million by 2021, and discussed the company's technology plan of "seeing" diamonds in ore before crushing. The 'holy grail' of the diamond industry, he says, is to not process kimberlite that does not contain diamonds. “Our quest has been to find a way to see diamonds in the rock. We have been at it for six years and we have evaluated many technologies and we settled on one, which, according to lab testing, showed promise.”