Zimbabwe To Reduce Royalty on Mined Diamonds to 10% from 15% 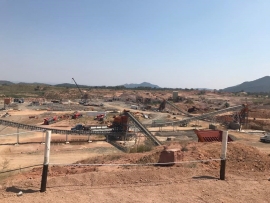 Zimbabwe's treasury will cut the royalty for diamond mining to 10% from 15% of gross revenue to reduce the cost of mining for conglomerate (hard rock) diamonds, attract investment and increase extraction, The Sunday Mail wrote over the weekend. Presenting the 2020 National Budget, Finance and Economic Development Minister Professor Mthuli Ncube said that since diamond miners are now exploiting deep-lying deposits, the cost of extraction has significantly increased. “In order to promote investment in exploration and extraction, I propose to review the royalty on diamond from 15 percent to 10 percent of gross revenue, with effective from 1 January, 2020,” he said.

Zimbabwe has set itself the goal of ramping up diamond production from 3.2 million carats annually to 6 million carats by end of 2023 after the country recently introduced a diamond mining policy. Diamonds are a critical component of Zimbabwe’s plans to grow the mining sector into a US$12 billion industry by 2023, writes Golden Sibanda for The Sunday Mail, with revenue from exporting diamonds set to hit US$1 billion.

Following Zimbabwe's 2016 consolidation of seven diamond mining companies into the Zimbabwe Consolidated Diamond Company (ZCDC) and two consecutive years of exclusively government-dominated diamond mining, Zimbabwe completed a diamond mining policy this year and re-opened the sector to private players. The new policy streamlined the mining of diamonds to only four players: ZCDC, Russia's Alrosa, Chinese firm Anjin and gold miner RioZim’s Murowa. It is expected that two additional diamond miners will be given licences by December this year, enabling them to start gem production in partnership with ZCDC.