Diamcor Turns Profit in Q2 Despite Decline in Sales 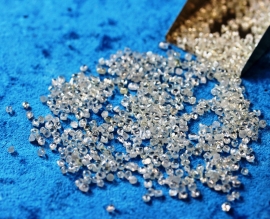 Diamcor Mining, a publicly-traded junior diamond mining company based in Canada and operating in South Africa, has reported a net income of C$350,676 for Q2 (the period ended September 30, 2019), a significant increase when compared to a net loss of C$417,368 realized during the same period in the prior fiscal year

Diamcor tendered and sold 3,883 carats of rough diamonds, generating revenues of C$730,962 (USD $569,059), which resulted in an average price of (US) $146 per carat. These results are lower than their revenues of C$1,041,470 (USD $726,846) and an average of (US) $278 per carat realized during the same period in the prior fiscal year in which several larger diamonds in the +10.8 special category were recovered, tendered, and sold. The decline in overall sales volumes during the current quarter was the result of the timing of rough diamond tenders during the current quarter with the final tender not closing until October of 2019, after the fiscal quarter, and reduced processing volumes due to contract heavy equipment reliability issues experienced early in the second quarter.

The junior miner cut down significantly on its operating expenses in the second fiscal quarter, achieving a negative (-$403,929) as compared to $521,429 incurred during the same period in the prior year. The company attributes the decline to their reduced heavy equipment and fuel expenses as compared to Q2 2018, a management-negotiated reduction of approximately $320,000 to the payable associated with the company’s previous heavy equipment contractor and, finally, a significant increase in rough diamond inventory stock on hand at the end of the second fiscal quarter. Diamcor had $918,183 in rough diamond inventory at the end of the fiscal quarter.

Diamcor said its primary focus in Q2 was on the processing of concentrate tailings. They say they have identified and corrected various issues experienced with past processing, which they say is "evident given the quantity and quality of rough diamonds being recovered during these exercises." Improving their operating practices and procedures provides the potential for increased recoveries on a per-ton basis as the company transitions back to the processing of material from the quarry in the coming weeks. They note that in addition to the potential for increased recoveries of rough diamonds recovered per ton of material processed, the lower average dollar per carat currently being realized from the concentrate tailings being processed is expected to return to higher historical averages as material from the quarry is processed, as the company expects a more balanced historical percentage of rough diamonds in all size fractions to be recovered.