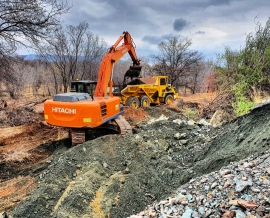 Botswana Diamonds ("BOD"), the AIM and BSE listed diamond explorer, has recovered its first diamonds from plant commissioning activities on the Marsfontein Mining Permit. These come from the diamond-bearing gravels and residual unprocessed stockpiles surrounding the Marsfontein Mine in South Africa. Essentially, BOD is mining the forgotten leftovers of a once-legendary small mine and stand to make it pay off.

The Mining Permit covering the diamond bearing gravels and residual unprocessed stockpiles surrounding the iconic Marsfontein Mine was granted to BOD's associate Vutomi Mining Pty Ltd. only a few weeks ago. The junior miner said that commissioning of the processing plant is well advanced following the installation of an in-field screen, two rotary pans, grease and x-ray recovery. Optimisation of the plant flow sheet is currently taking place and this will be followed by ramping-up to full production of 400-tons of pan feed per day.

John Teeling, Chairman of BOD said he is "delighted with the rapid progress the team has made on-site and it is noteworthy that the first diamonds were recovered within two weeks of the Mining Permit being granted." The Marsfontein mine, which comprises a kimberlite blow, was operated for two years in the late 1990s and recovered its entire development cost in less than four days. Marsfontein's run of mine grade was 172cpht and its assortment was known to contain fancy coloured diamonds. Evaluation work on the gravels and residual stockpiles adjacent to and surrounding the mine, conducted at the time of mining, indicated them to be diamondiferous with favourable economics. These deposits were overlooked when the mine was closed.