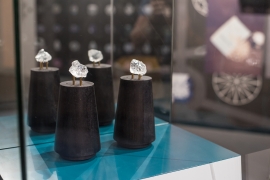 Leading producer of high-value stones Gem Diamonds recorded modest declines in Q3 compared to Q2, reporting fewer carats sold, lower revenue and average prices achieved for its goods from the Letšeng mine in Lesotho. A year-over-year comparision, however, paints a picture of a more substantial decline and reflects the realities miners are facing in this slumping market.

During the quarter, the miner recovered four diamonds weighing over 100 carats, bringing the total to seven for the nine-month period. They sold five diamonds for over $1 million each, generating revenues of $11 million. Gem Diamonds has reduced its capital expenditure in 2019 by approximately US$ 7 million, reducing expected capital spend for the full year to about US$12 million. They say that the targeted US$100 million in incremental revenue, productivity improvements and cost savings over the 4-year period to end 2021 is on track and is expected to deliver US$50 million by the end of 2019. Moving forward, the miner has increased its anticipated ore treated guidance but slightly lowered its carats recovered guidance and carats sold.