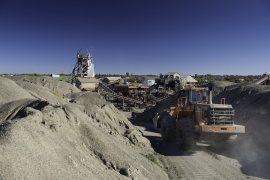 In a statement, Petra said it "believes that there is a space for artisanal small scale miners to co-exist with formalised, large-scale mining, since ASM can often profitably recover diamonds from resources that would be unprofitable, or at best marginal, for a larger operator due to the capital and overhead costs involved." To this end, the miner will make available as a some of their Tailings Mineral Resources (TMR) for the benefit of the community of Koffiefontein. The intention is that properly regulated artisanal mining, which would comply with the Kimberley Process Certification Scheme, as well as other standards for such operations set by, inter alia, the United Nations, will be conducted on this resource.

To facilitate the optimal exploitation of the available resource and accrue maximum benefit to the community, the Koffiefontein Community Mining Primary Cooperative (KCM) has been officially established and registered as the primary beneficiaries of this project, as well as the infrastructure and processes required to ensure the operation of this venture have been put in place. "We regard this initiative as yet another milestone in the Petra legacy and we welcome the KCM artisanal miners as partners in our industry to complement our own operations and extract optimal benefit from the diamond reserves in Koffiefontein," said Richard Duffy, Chief Executive of Petra. "We wish KCM all of the best with this venture, and thank our Government and community partners for their continued support of both the project and the KCM."

This is the second ASM initiative Petra has set up to facilitate the establishment of the ASM sector in Kimberley. The first culminated in the landmark agreement in 2017 between Kimberley Ekapa Mining JV and other stakeholders, which allocated tailings in Kimberley to two community-based primary mining co-operatives. The deal legitimized Kimberley’s illicit miners, known as 'zama-zamas', as Deputy Minister of Mineral Resources Godfrey Oliphant issued the artisanal miners permits with the intention of curbing the rapid growth of illegal mining. At the time, Deputy Minister Oliphant said, “The most effective way of combating illegal mining is legalising it. Once you formalise it, it solves many problems," but it did not solve all of the problems, as security remained an issue. The 2017 deal gave the artisanal miners about 500 hectares of diamondiferous land. Petra in 2018 ended up selling its majority stake in the Kimberley Ekapa Mining joint venture to Ekapa Mining for about 300 million rand ($22 million).