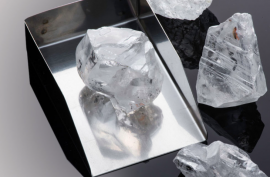 Lucara Diamond had what could be considered a steady third quarter despite ending in a net loss due primarily to an increase in operating expenses as well as depletion of reserves and amortization, both non-cash expenses. The miner also completed a positive feasibility study for development of an underground mine at Lucara’s Karowe Diamond Mine in Botswana; the underground expansion at Karowe is expected to double the mine life and generate significant revenue and cashflow out to 2040.

The value of the rough diamonds sold at five sales through the Clara platform - Lucara's web-based, digital sales platform that allows customers to purchase rough diamonds individually, based on specific demand - doubled in Q3 2019 to $2.4 million. Combined with the five sales that were completed on the platform during the first six months of 2019, Lucara has generated a total of $6.0 million since sales began. They note that Clara's customer base has grown in the third quarter from 20 to 27 clients, and sales continue to ramp up according to plan. Their objective is to begin adding third-party production to the platform before the end of the year in order to meet anticipated demand.

For the first nine months of the year, Lucara has generated revenue of $136.5 million, or $436 per carat, a significant dropoff from the $564/carat achieved during 9M 2018, driven by better recoveries in the smaller, lower value sizes. The miner achieved an operating margin of $254 per carat, a 58% decline from the same period in 2018 ($356 per carat). The decline is attributable to the reasons mentioned above - non-cash expenses increased from $20.1 million in YTD 2018 to $38.1 million in YTD 2019 due to a combination of factors including a 30% higher volume of carats sold. Lucara increased the volume of rough sold In the first nine months of 2019, to 313,189 carats compared with 240,245 carats last year.

They attribute the significant increase in carats to the continued strong performance of the plant, which processed 2.16 million tonnes during the nine months ended September 30, 2019 (YTD 2018: 2.03 million tonnes milled). Lucara further notes that overall performance in Q3 is consistent with the strong operational results achieved in the first half of 2019 and continues to build upon the significant operational improvements executed in late 2018 following a transition between mining contractors. In addition, investments made in the plant during 2017 and 2018 are being realized through increased diamond recoveries and higher plant availability.

"Lucara continues to deliver solid results and strong margins on the back of strong operational performance at Karowe in Q3," said Eira Thomas, President & CEO. "With operating margins at Karowe approaching 60%, and no long-term debt, Lucara is well positioned to continue to weather the difficult diamond pricing environment that has prevailed since the beginning of the year." The Karowe Mine has produced 2.5 million carats since 2012 and generated $1.5 billion in revenue.  The feasibility study looks to double the mine life from the original mine design and add net cash flow of $1.22 billion and gross revenue of $5.25 billion. If they can start construction in mid-2020, they expect that ore from underground mining will seamlessly integrate into current operations starting in 2023. They note that current production rates will be maintained through the underground ramp up period.