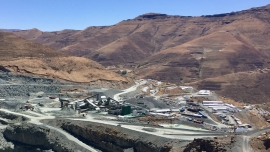 Firestone Diamonds last week reported a decline in revenue during for the quarter ended 30 September 2019 (Q1 of their 2020 FY) due mainly to lower sales prices for diamonds from its Liqhobong mine in Lesotho. The miner has had to deal with a power supply cut to the mine since 1 October, which forced Firesetone to temporarily shut down the mine's treatment plant until power is restored. They have rented diesel generators and anticipate that production at the mine will recommence in early November once the generators are connected to the mine's electrical infrastructure. They have cancelled their December tender due to fewer carats being recovered as a result of the power outage, with the next tender taking place in Antwerp in January 2020.

Firestone made fewer carat recoveries during the quarter despite treating 963,986 tonnes of ore, which was the highest quantity of tonnes treated during a quarter in a year and 7% more than the previous quarter's 904,902 tonnes. They said the higher quantity of tonnes treated was due to better equipment availability and higher plant throughput rate. However, due to a lower grade of recovery, output declined to 201,091 carats from 208,572 carats in the final quarter of 2019. The miner held a single sale of 168,612 carats during Q1, generating revenue of $10.6 million, down from $12.7 million in the previous quarter. The average price fell to $63 per carat from $71 per carat earned in the prior quarter. The decline in average value came despite the sale of several notable stones - including a 37-carat fancy pink stone, and a 55-carat fancy yellow stone and 98-carat light yellow makeable - due mainly to the sale of fewer high value stones and a slightly higher proportion of smaller goods. Operating costs, however, fell to $10.32 per tonne - below guidance - from $12.57 per tonne.

Paul Bosma, Chief Executive Officer, commented: "The first quarter performance was again solid from an operational perspective. However, from a market perspective, pricing remains subdued." He then indicated that the company has reached the point of looking for solutions to their debt issue with a view to remaining operational."The Company continues to engage with its debtholders to ensure it can sustain operations through the current downturn and further announcements in this regard can be expected in due course. The recent power interruption is an unexpected setback for the company but we are doing our utmost to limit the negative impact on production by renting generators to get operations up and running again until the grid power is back online and stable. We will advise on any adjustments to guidance in future quarterly updates."

As mentioned, the prices realised for the smaller goods that make up the bulk of Firestone's production by volume remain subdued, impacted by a build-up of rough and polished inventory in the midstream. Prices are expected to increase towards the end of 2020 as rough supply decreases as a result of continued reduced sales volumes by De Beers and Alrosa and the anticipated closure of the Argyle mine in Australia. In the meantime, the company notes that the loss of revenue and higher operating costs will "impact the company's cash balance, and together with the impact of a weaker diamond pricing environment, has placed further focus on finding an interim solution regarding its indebtedness with ABSA bank and the bondholders, who both remain actively engaged."