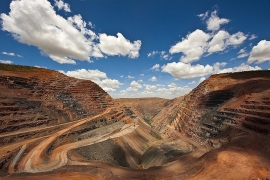 Rio Tinto saw its diamond output fall in the third quarter of 2019 (three months ended September 30, 2019), citing lower carat grades from its Argyle mine in Australia and lower ore availability at the Diavik mine in Canada. The multinational mining group reported a 7% decline in diamonds produced during the quarter and a 9% drop over the first nine months of the year.

Rio Tinao has maintained its diamond production guidance for 2019 between 15 and 17 million carats, compared with 18.4 million carats recovered last year.