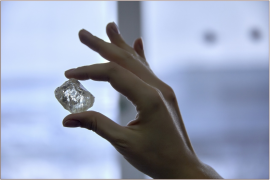 Russia's Alrosa, the leading diamond producer in the world by volume, has recovered its largest gem-quality rough stone in three years: 232.4 carats. The massive diamond was was unearthed at Udacnhaya kimberlite pipe on October 19.

"Such large gem-quality crystals are extremely rare," said Evgeny Agureev, Deputy CEO of Alrosa. "Of course, they are present at Alrosa's deposits, but we have not seen them since 2016, when two diamonds weighing over 200 carats were mined." He added, "We look forward to seeing the stone at the United Selling Organization of Alrosa for detailed study and evaluation. This year the Udachnaya pipe has brought us such a gift twice. Earlier in January, a large diamond weighing 191.46 carats was mined there."

Discovered in 1955, the Udachnaya kimberlite pipe is one of the largest primary diamond deposits in Yakutia and globally. Since the beginning of development in 1967, this deposit has brought in hundreds of large diamonds. In the first 9 months of 2019, the Udachnaya pipe produced 2.385 million carats of rough diamonds.