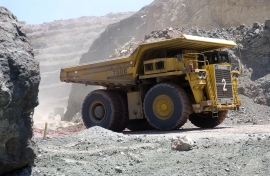 De Beers' rough diamond production in the third quarter of 2019 declined by 14 percent to 7.4 million carats, with significant reductions in South Africa and Canada which the miner says was planned. "In addition," they note, "we continue to produce to weaker market demand due to macro-economic uncertainty as well as continued midstream weakness." For the year to date, De Beers ouput is lagging 12% behind the first nine months of 2018, falling to 23 million carats from 26 million carats. Q3 output fell 3% from Q2 output.

The major declines came in South Africa, where production decreased by 60% to 0.5 million carats due to lower mined volumes at the Venetia mine as it approaches the transition from open pit to underground mining. In addition, they notetm, production at the Voorspoed mine ended in Q4 2018 when it was placed on care and maintenance in preparation for closure. Production in Canada - where De Beers holds a 51% interest in the Gahcho Kué joint venture with Mountain Province as its only operational Canadian mine - decreased by 34% to 0.8 million carats primarily due to the closure of the Victor mine, which reached the end of its life in Q2 2019.

In Botswana (Debswana), production was flat at 5.7 million carats. Production at the Orapa mine increased by 22% due to a planned increase in the grade of material treated, but this was offset by an 18% decrease at its Jwaneng mine due to planned lower grade. In Namibia (Namdeb), production declined by seven percent to 0.4 million carats, as the Elizabeth Bay land operations were placed on care and maintenance in Q4 2018. Last September, Namdeb sold Elizabeth Bay Mine and its associated marine assets as a going concern to Lewcor, a 100% Namibian-owned consortium, for just over US$8 million. Namdeb had explored a variety of options to extend the life of its Elizabeth Bay Mine beyond 2019, but ceased operations in September 2018, as Namdeb could no longer economically run the operation.

De Beers has kept its production guidance unchanged at ~31 million carats, subject to trading conditions. While rough diamond sales in Q3 were higher than in Q2, this was due to holding three sales compared to two during the last quarter, and is not attributable to improved demand. As the miner makes clear, "overall demand for rough diamonds remains subdued as a result of challenges in the midstream with higher polished inventories and caution due to macro-economic uncertainty."

Image source: De Beers, mining at the Orapa diamond mine - the world's largest open-pit diamond mine by area.