Firestone Diamonds Still Lacks the Power to Run Liqhobong Mine 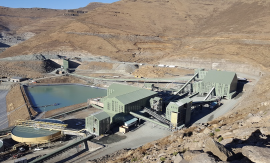 As first reported nearly two weeks ago, the power is still out at Firestone Diamonds' Liqhobong mine in Lesotho. The company said that "whilst every effort has been made over the past week to identify and to resolve the power issue, the Liqhobong mine remains without sufficient power to operate the processing plant."

The Liqhobong Mine is supplied electricity from the Muela Hydropower Station (MHS), which commenced a two month maintenance shutdown on 1 October, after which the mine experienced unexpected voltage fluctuations that caused the drives of the plant equipment to trip, resulting in a severe disruption of operations. The miner says it has initiated contingency measures to restore power by alternative means within the coming weeks while they continue to engage with the Lesotho Electricity Company (LEC) and ESKOM, South Africa's power utility to try to resolve the interruption of grid power to the mine.

To bridge the waiting time until the electricity company is able to restore power, Firestone has placed an order to hire diesel generator units to run the mine's processing plant. These are only scheduled to arrive on site by the end of October and to be fully operational shortly thereafter, during early November. The generators are expected to be used to generate power until grid power is restored from the Muela Hydropower Station, which is supposed to take place on 1 December 2019. The expense of renting the generators and burning the diesel to run them will likely increase normal operating costs.