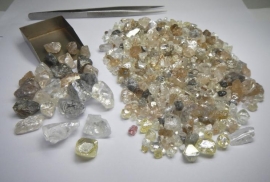 Lucapa Diamond Co. and its respective partners have reported record production for the September 2019 Quarter (July - Sept.) as its their high-value Lulo alluvial mine in Angola and the Mothae kimberlite mine in Lesotho achieved combined production of 14,610 carats. The company says its results are "in line with Lucapa’s strategy of expanding high-value diamond production to maximise revenue generation."

Lucapa has reported production of 7,603 carats at the Lulo project, representing a 67% increase over the previous corresponding 2018 quarter and the second-highest quarterly result on record, while production hit 7,007 carats at their Mothae mine, the highest quarterly result since commercial production commenced in January 2019. During the quarter, the miner producied a total of 432 diamonds weighing more than 4.8 carats, including 136 Specials (+10.8 carat diamonds). The Lulo mine was far and away the better producer of large stones, with 97 'specials' compared to 39 at Mothae.

The strong production increase at Lulo was primarily due to a significant increase in the recovered diamond grade of 10.5 carats per 100 cubic metres (“cphm”) as more material was processed from the new higher grade flood plain Mining Blocks 19 and 31, nearly doubling its output from the previous quarter. The production of 7,007 carats at Mothae in Q3 was 30% ahead of plan.The recovered diamond grade of 2.3 carats per 100 tonnes (“cpht”) for the Quarter was 16% ahead of plan, while the record 298,726 tonnes treated during the Quarter was 11% ahead of plan.