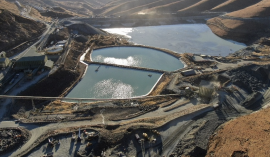 Firestone Diamonds has announced a production disruption at its 75% owned Liqhobong Mine in Lesotho due to intermittent power supply. The Liqhobong Mine is supplied electricity from the Muela Hydropower Station (MHS) which is owned by the Lesotho Electricity Company (LEC) and which forms part of the Lesotho Highlands Water Project Phase 1 Katse Dam.

The MHS commenced a two month maintenance shutdown on 1 October at which time ongoing supply was to be provided by Eskom, South Africa's power utility company. Since then, the mine experienced unexpected voltage fluctuations that caused the drives of the plant equipment to trip and as a result, operations have been severely disrupted. Management is addressing the issue urgently with the LEC and Eskom, and will provide further updates in due course.

Earlier this week Firestone announced it would seek approval from its shareholders for, among other things, the continued issue of ordinary shares of 1 pence each as interest payments under the terms of the U$30 million Series A Eurobond debt facility. On July 1 2019, ABSA Bank Limited agreed a waiver for certain of its covenants  under the terms of the US$82.4 million senior secured term facility agreement. As a condition to the ABSA Waiver, Firestone got its bondholders RCF and Pacific Road to waive its requirement to pay quarterly interest in cash on the Series A Bonds for the 12-month period from 1 July 2019 to 30 June 2020. “The company wishes to continue to service the interest on the Series A Bonds through the issuance of ordinary shares to the bondholders and is therefore seeking approval to issue up to 195,309,376 Series A interest shares,” it said.

Additionally, Firestone said although the group's cash balance was $21 million as at 30 September 2019, the trading environment remains difficult and as a result it is actively engaging with its debtholders to ensure it can sustain operations through the current downturn. “However further deterioration in the financial or trading position is possible and may have material implications for the solvency of the company independently of the passing of the resolutions,” it said. Trading conditions continue to be challenging due to the ongoing depressed pricing of rough diamonds across the industry as well as fewer valuable stones recovered resulting in lower than expected average values being realised.