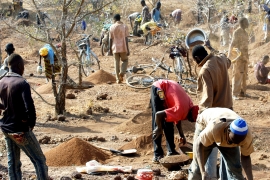 Zimbabwe accused the U.S. of ignorance after the U.S. Customs and Border Protection announced it that it is blocking rough diamond imports from the Marange fields because they were produced with forced labor, writes Ray Ndlovu for Bloomberg.

“It’s unfortunate that the U.S. authorities have been misinformed or misled to believe that Zimbabwe is mining diamonds through forced labor,” government spokesman Nick Mangwana said Tuesday by text message. “As a government we have a very strong revulsion towards any form of slavery or servitude. To even suggest that Zimbabwe has some form of corporate forced labor is either mischievous or simply ignorant.”

Imports from Zimbabwe are not the only ones targeted by the ban. The U.S. agency listed a range of products earlier Tuesday, from garments from China to gold from the Democratic Republic of Congo.