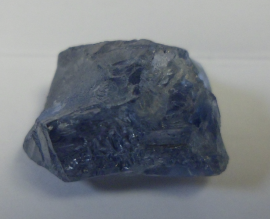 Petra Diamonds has recovered an exceptional 20.08-carat blue gem-quality Type IIb diamond from the Cullinan Diamond Mine in South Africa, which has been the world's only consistent source of some tremendous blue diamonds in the past. The miner writes, "Today's recovery not only demonstrates the quality of Petra's asset base, as the Cullinan diamond mine remains a significant source of rare blue diamonds, but it again confirms the prevalence of exceptional stones in the Cullinan orebody as well as the ability of the mine's plant to recover the full spectrum of diamonds." Petra also recovered a 6.12-carat Type II blue diamond at Cullinan on March 8.

The recovery of this blue stone will come as welcome news to the London-listed company, which recently reported a 22% deline in profits and a 6% decline in total revenue for the 2019 fiscal year. Revenues were $463 million - a decline of US$31 million from the previous year. Even though Petra produced more diamonds, they solde for a lower average price than in the previous year, with Petra citing weak market conditions for the revenue shortfall.

Demonstrating its value as a source of valuable blue diamonds, back in 2014, Petra recovered an 'exceptional' 122.52-carat blue diamond, called "The Cullinan Dream", from the same mine in South Africa, which the miner sold for $27.6 million, or $225,269 per carat. That rough stone yielded the eponymous 24.18-carat, fancy intense blue diamond among the four large polished diamonds that came out of the big rough stone. Only months before that, Petra sold a 29.6 carat blue diamond from the Cullinan mine for the remarkable sum of $25.6 miilion or $862,780.38 per carat. After cutting and polishing, the stone was unveiled as the ‘Blue Moon’, a 12 carat cushion-cut diamond of the highest quality - being ‘fancy vivid’ blue in color and ‘internally flawless’ in clarity. In November 2015, the stone was sold at a Sotheby’s auction in Geneva for US$48.5 million (over US$4 million per carat), representing at the time a world record price per carat for any diamond. Other notable diamonds the mine has yielded in recent years include a 25.5 carat blue diamond, which was sold in May 2013 for $16.9 million (or $663,114 per carat), and a diamond found in 2008, known as the Star of Josephine, which was sold for $9.49 million, or US$1.35 million per carat, which at the time was the world record price per carat achieved for any gemstone at auction.