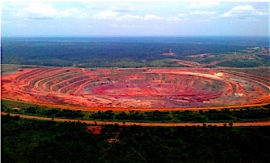 An American court has granted Russian miner Alrosa's request for the discovery of documents from banks active in New York over alleged embezzlement of funds from its Angolan diamond mine Catoca, Africa Intelligence reports. As reported last May, Alrosa believes that the former and current management of Angolan diamond mine Catoca - in which Alrosa holds a 41% stake - is responsible for secreting away nearly $10 million, and called upon a U.S. court to obtain discovery of evidence. New York judge Paul Gardephe's August 5 decision gave Alrosa the green light to track down the missing funds.

Alrosa went to the Southern District of New York hoping to gain access to documents that would prove that Catoca transferred millions of dollars into shell companies scattered around the world - from Hong Kong to the Bahamas, Cyprus, the UK and US. The Russian miner claims a total of $9.8 million was embezzled from Catoca's accounts while Russian national Sergey Amelin was general manager of the mine; he was replaced in August last year. Alrosa believes the money was transferred to banks in New York to pay for equipment and services from companies that either did not offer such services or conducted no business activity whatsoever. They have now been authorised to request documents from 16 banks active in New York to see whether they contain information about payments, deposits or withdrawals of $10,000 or more made between February 2015 and December 2018 in which Amelin was involved.

The banks will also need to provide Alrosa with documents related to any bank operations of $100,000 and over made during the same period by Catoca and Sociedade Mineira de Catoca, the two entities operating the mine jointly owned by the Russian company and Angolan state-run Endiama. Alrosa conducted its own investiagation prior to initiating this step in the NY court. Their investigation reportedly identified eight companies that received payments from Catoca of between $113,000 and $5 million, whereby Catoca dealt with an intermediary who overcharged Catoca for goods and services performed by others.