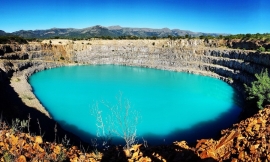 Botswana Diamonds (BOD), the AIM- and BSE-listed diamond miner that holds exploration licences in Botswana and South Africa and a JV in Zimbabwe announced that its associate Vutomi (BOD interest 40%) has been granted environmental authorisation over a substantial portion of the residual diamond-bearing gravels produced from the very high grade Marsfontein mine in South Africa, which is contiguous to their Thorny River operation. In a statement on Thursday, Botswana Diamonds highlighted that this authorisation was a critical step towards obtaining a mining permit, which it expected to receive shortly. A mining permit covers an area of 5 Hectares and has a lifespan of 2-years, which is renewable.

Botswana Diamonds Chairmain John Teeling believes diamond riches were overlooked and left behind in the gravels and stockpiles after mining at Marsfontein ended in 2001, as the very high grade of diamonds in the ore 'distracted' the original miners from the gravels - though these were confirmed to be diamond-bearing through subsequent sampling. "We believe that the mine gravels and unprocessed stockpiles around the Marsfontein mine contain commercial grades of diamonds," Teeling said. "To secure the Mining Permit we need certain approvals. Granting of the Environmental Authorisation is a critical step. This facilitates the issuing of the Mining Permit necessary for BOD to recover and sell the diamonds. We plan to shortly commence royalty mining operations at no cost to the company." BOD has identified potential partners to process the gravels and stockpiles and expect mobilisation to commence within six weeks.

The Marsfontein mine was an extraordinary success story, as the kimberlite was mined for only two years, from 1998 to 2000, but repaid its entire capital outlay with its first 3.5 days of production. Some 40,000 carats were recovered in the first two days and 165,251ct in the first month. In total, some 1.8 million carats were recovered from 970,347 tonnes of kimberlite, equating to an exceptional grade of 188 carats per hundred tonnes. Total revenue after processing was over $246 million at an average value per carat of $129 (in 2000). Further low-grade stockpiles from gravels around the pipe and a stock work of kimberlite were processed in 2001 and produced an additional 94,534 carats.

A Case History of the mine by Keith Scott (in Annex), from which these figures are drawn, concluded that the discovery of Marsfontein proved that small pipes can be extremely lucrative, and in doing so changed diamond exploration philosophy in terms of target size. it also showed showed that there is still potential for significant finds in areas already covered. The original miners were Canadian junior SouthernEra in conjunction with De Beers and their black empowerment partners (later to become Naka Mining).