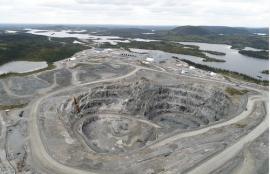 Struggling Canadian miner Stornoway Diamonds, which has been particulary impacted by the 2019 market downturn, has announced two moves that should provide the financing and liquidity required to ensure the Renard Mine will continue to operate while the company undergoes restructuring. Stornoway Diamonds Corp. and its subsidiaries Stornoway Diamonds (Canada) Inc. (SDCI), Ashton Mining of Canada Inc. (Ashton), and FCDC Sales and Marketing Inc. (FCDC) - collectively referred to as the “SWY Parties” - applied to the Superior Court of Quebec for protection under the Companies’ Creditors Arrangement Act (CCAA) while it restructures its business and financial affairs. Later Monday afternoon, Stornoway obtained an initial order from the court. As part of the restructuring, a group of lenders will assume ownership of the mine while Stornoway continues to operate it.

Along with the filing, the SWY Parties entered into a letter of intent (LOI) with certain secured creditors - include Diaquem and Osisko Gold Royalties - who will acquire through an entity to be formed for this purpose, substantially all of the assets and properties of the SWY Parties, and assume the debts and liabilities owing to the secured creditors as well as the ongoing obligations relating to the operation of the Renard Mine. Concurrently with the entering into of the LOI, the SDCI, Ashton and FCDC, as borrowers, have entered into a definitive and binding working capital facility agreement with the Participating Secured Creditors providing for a working capital facility in an initial amount of C$20 million (US$15.2 million), which can be increased for additional amounts.

“The working capital facility provides the financing and liquidity required to ensure that the Renard Mine continues to operate in an uninterrupted manner”, reads the statement from Stornoway, and, together with the LOI, “demonstrates the strong support of the SWY Parties’ for the Renard project during the restructuring process.” Stornoway explains that, "The continued downward pressure on the market price for rough diamonds as well as a variety of other factors and circumstances, have contributed to the Corporation’s inability to generate positive free cash flow in 2019, and to maintain an adequate level of working capital. In addition, the SWY Parties’ high level of indebtedness resulted in an inability to consistently meet their debt repayment obligations.

After an attempt to sell the mine did not result in any acceptable qualifying third-party bids, the board of directors of each of the SWY Parties determined separately that it is in both the best interests of the SWY Parties as well as those of their respective stakeholders to seek protection under the CCAA and full implementation of the transactions contemplated under the LOI. "If the Court grants the initial order sought, the SWY Parties intend to continue to operate and manage their business in the ordinary course, including the Renard Mine, and with the available liquidity provided under the WC Facility Agreement the SWY Parties expect to be able to meet their short-term and current payment and other obligations to employees, suppliers as well as customers as and when they become due."

According to Le Journal de Montréal, Stornoway is said to be about C$500 million in debt (US$380 million), with a net loss that increased to CAD 346.3 million ($259.9 million) in the second quarter. In the meantime, trading in Stornoway’s common shares on the Toronto Stock Exchange has been halted and they expect that the delisting process by the TSX will be accelerated, with Stornoway's common shares and convertible debentures to soon be delisted. Stornoway believes that, irrespective of the outcome of the CCAA proceedings, there is and will be no recoverable or residual value in either Stornoway’s common shares or convertible debentures. The protection granted by the government signfies that the government will lose millions of its own investment capital, while the shareholders will likely lose everything. "On the one hand, this is certainly not easy because there are people that will lose on this," said CEO of Stornoway Patrick Godin. "But on the other hand, by continuing our mining activities, we will protect more than 500 jobs and will be able to pay our suppliers, 95% of whom are from Quebec." Bryan Coates, president of Osisko - one of the creditors to assume control of the company - told the paper, "it could take 18 months to two years before Stornoway finally sees the light at the end of the tunnel."