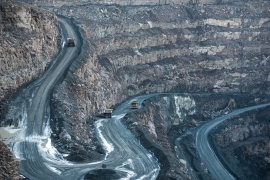 Gem Diamonds first half 2019 results took a downturn as the miner recoverd fewer large stones at its Letšeng mine in Lesotho, while the average prices achieved per carat - while still the highest in the business - fell well below their averages over the past three financial halves. While year-over-year comparisons are somewhat skewed by the very high bar set in in H1 2018, revenue from the sale of rough stones was down 44% to $94.5 million compared with $168 million in H1 2018, though it was not too far off revenue from the previous half (H2 2018), which totaled $99 million. As a result, attributable profit declined by 75% year-over-year to $6.6 million from $26.8 million in H1 2018.

The company attributed their prices achieved to the "planned limited contribution from the Satellite pipe ore and current diamond market conditions." The satellite pipe is where Gem recovers a higher percentage of high-quality diamonds at a higher grade than the main pipe, which is where they mined a larger share of their ore this past half. This shift to recovering goods from the main pipe pushed diamond recovereies down to 56,700 carats from 65,300 last half and 61,600 in H1 2018. 75% of Gem Diamond's revenue came from stones weighing more than 10 carats, but they recovered fewer than average in each category: in total they recovered 120 stones weighing more than 20 carats this past half compared to an average of 210.

Speaking of their four-year business transformation program, Clifford Elphick, CEO of Gem Diamonds, said "The Group has successfully implemented the business transformation program, already achieving US$42 million net of fees, and is on track to deliver the planned US$100 million in cost savings and efficiencies by 2021.” They have targeted annual savings of $30 million starting in 2022.