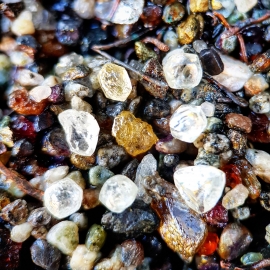 Botswana Diamonds, the AIM and BSE listed diamond explorer that holds exploration licences in Botswana and South Africa and a JV in Zimbabwe has identified what is believed to be five kimberlite pipes buried at shallow depth on the Company's Thorny River ground in South Africa, the company announced. They say the targets identified are very similar to the pipe that constituted De Beers high-grade and famous Marsfontein mine*, meaning it would be a potential significant diamond discovery. It is similar to that mine in that the pipe had little surface indication due to dolerite rock cover, yet grew and swelled below the dolerite.

Botswana and its partners could drill at Thorny River some time next year. In the meantime, the company will spend the next eight weeks or so narrowing the target area. "It has long been held that there should be high grade kimberlite pipes other than the Marsfontein mine in the Thorny River area," said Chairman John Teeling. "The geology made discovery difficult. New geophysical technology tries to see through the dense dolerite cover. The company pioneering the work, Subterrane, believe they have identified 5 targets likely to be kimberlites. We are working to better define where to drill. The targets are shallow so will not be expensive to drill."

Much of the Thorny River area geology is comprised of a dolerite dyke swarm, the company explains. Conventional geophysical techniques have been unable to detect kimberlites under the dolerite including those that are deeper seated. Subterrane, a partner using its proprietary technology, enables the company to explore geophysical anomalies beneath the dolerite and those that are buried.  This could lead to the discovery of kimberlites similar to Marsfontein.  Thus far Subterrane has identified five such target areas within the Thorny River project.

*The Marsfontein mine was an extraordinary success story, as the kimberlite was mined for only two years, from 1998 to 2000, but repaid its entire capital outlay with its first 3.4 days of production, it is claimed. In total, some 1.826 million carats were recovered from 970,347 tonnes of kimberlite, equating to a grade of 188 carats per hundred tonnes.