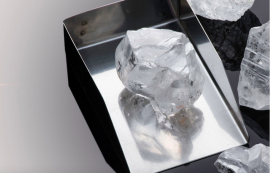 Despite higher production and sales volumes, Lucara Diamond recorded a much lower profit in Q2 2019 than the same period a year earlier, as the extended slump in the diamond trade demonstrates it offers no immunity. L Lucara reported net earnings of $700,000 for the quarter on revenue of $42.5 million, figures which compare unfavorably with a profit of $19.7 million on revenue of $64.5 million in the same quarter in 2018.

Lucara’s Karowe diamond mine in Botswana is known for producing large, high-value stones, but in the Q2 iteration of 2019 saw revenue tumble by 34% even as sales volume rose 17% and production rose by 42% The miner sold 101,931 carats during the quarter at an average price of $417 per carat, which is 47% lower than in 2018 when they sold 87,465 carats at an average of $856 per carat. The company, however, notes that it has since changed its sales strategy, explaining that the difference in average price is due to the exceptional stone tender held in Q2 2018 for which there was no comparable sale in 2019, together with higher recoveries of small diamonds owing to plant processing improvements.

Still, despite the preponderance of smaller-value diamonds sold in Q2, Lucara still recovered 225 special-size diamonds — over 10.8 carats — during the quarter, including a whopping 10 weighing more than 100 carats. The miner sold seven of those stones for more than $1 million each, while two fetched over $3 million each. "Having focused on operational improvements to drive performance, carat recoveries have significantly increased and costs have gone down," said Eira Thomas, President & CEO. "Overall average prices achieved for our diamonds during the first half of the year have settled at $463 per carat and reflect a higher contribution of fine (smaller) diamonds, with continued strong recoveries of single diamonds larger than 10.8 carats that contribute to more than 70% of our revenues." She also notes that In April 2019, Lucara recovered the largest diamond to be mined at Karowe to date: 1,758 carats. It is the largest diamond recovered in Botswana and one of the largest diamonds recovered in recorded history; Lucara is now considering how to market it.

In H1 2019, Lucara sold a total of 196,989 carats (H1 2018: 138,646 carats) achieving a year-to-date average price of $463/carat (H1 2018: $648/carat). The number of carats sold was 42% higher than in the comparative period which is being driven by better recoveries in the smaller, lower value sizes.  While still profitable, the smaller goods impact the average price per carat sold when compared to the prior year. They also sold $2.9 million in rough diamonds through seven sales on its Clara platform, bringing total revenue to $3.5 million since they launched the platform in December 2018.

Lucara notes that the market for both rough and polished diamonds remains challenging due to an excess supply of polished diamonds and reduced credit available in the mid-stream of the supply chain. Liquidity issues and concerns over manufacturers' profitability have resulted in weaker demand, while global trade disputes and unrest are also contributing factors, resulting in lower prices for rough diamonds. Weaker demand has been reported across all size classes and larger producers are withholding goods or allowing their customers to defer rough diamond allocations. Lucara has raised its production guidance for the year and is now expecting output to increase to 375,000 - 420,000 carats, compared to prior estimates of 300,000 - 330,000. They also expect to sell 375,000 - 420,000 carats, up from prior expectations of 300,000 to 320,000. Revenue for the year, however, is not expected to increase along with sales volumes, as lower-value stones will again make up a large portion of the sale. They have held their revenue guidance steady at $170 million to $200 million.