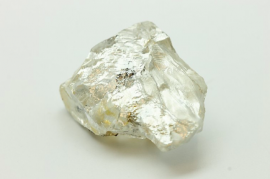 AGD Diamonds recovered three large diamonds weighing more than 100 carats between May and July 2019 at the Grib diamond mine in the Arkhangelsk Province of Russia and has now given them names. The largest of them, a unique diamond weighing 222.09 carats - touted by the company as the largest ever discovered in Europe - was named “Vladimir Grib” in honor of the former AGD chief geologist, an outstanding exploration pioneer. The stone was recovered on May 4, 2019 and is likely to be sold in Antwerp.

The recovery of the largest of the three followed just a day after the company unearthed a diamond weighing 127.34 carats, which was named after Elisey Verichev in honor of the AGD veteran, who discovered the Lomonosov and then Grib diamond deposits. The diamond crystal weighing 212.53 carats, which AGD Diamonds recovered on July 18 this year, was named after Lev Rovnin, the ex-Minister of Geology of the former Russian Soviet Federative Socialist Republic, who oversaw the discovery of the Arkhangelsk diamondiferous province and its preparation for industrial development for several decades. The company decided to assign names to its unique diamonds to honor the memory of outstanding people of Russia. They have named nine exclusive diamonds thus far.

AGD, which operates the Grib mine, is owned by Otkritie Holding, a Russian company that purchased the business from Lukoil for $1.45 billion in 2017. While 5% of production remains in Russia for sale by the government, the remainder is exported to the group’s Grib Diamonds subsidiary in Antwerp.