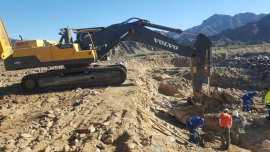 Canada-based and South Africa-focused diversified junior mining company Tango Mining has announced it plans to sell off its stake in several metallurgical coal projects in order to focus solely on diamond extraction. Moving forward, the company’s attention will be centered on the Oena diamond mine in South Africa, which has proven lucrative for the miner. During the latest production period, 531.82 carats of gems were recovered from Oena. The 230 diamonds sold for an average price of US$1,382 per carat.

Tango will sell its 74 percent stake in the Kwena Group, which consists of the following coal operations: Kwena Mining Projects, Kwena Mining and Metallurgical Services and Kwena Springlake Projects. The assets will go to Kevin Gallagher, a director at the company who will acquire the Kwena package in what has been dubbed a “related party transaction” requiring shareholder approval. Gallagher will return almost 40 million common shares of Tango priced at C$0.05 (US$0.038) each, totaling C$1,999,508 (US$ 1.5 million). “After cancellation of the shares, Kevin Gallagher will not hold any securities of the company, other than stock options,” notes a Tango press release. Outstanding debts of C$723,000 (US$545,699) owed by Tango and its subsidiaries to the Kwena Group will be forgiven. An informal valuation performed on the Kwena Group assets placed their worth at C$2.3 (US$1.7) million.

In addition to a renewed focus on diamonds, Tango will change its name to Southstone Minerals. Both the sale and the name change are subject to TSXV approval.