Rio Tinto Returns $3.5B to Shareholders, Takes Loss on Diamonds 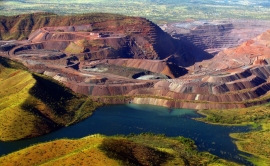 Leading global consolidated miner Rio Tinto today (August 1) announced it would be returning $3.5 billion to its shareholders, including an interim dividend of $2.5 billion and a special dividend of $1.0 billion. The dividends decision followed a half-year performance where Rio earned $20.7 billion in consolidated sales revenue, a 9% increase over H1 2018, and ended with underlying EBITDA of $10.3 billion, a 19% increase over H1 2019. The miner said the increase reflected higher iron ore prices which more than offset the impact of lower volumes, higher costs and lower copper and aluminium prices.

Weaker diamond prices, however, led to a $5 million loss for the first half of 2019 ending June 30, compared with a profit of $55 million during the same period a year ago. Rio Tinto's gross revenue from diamonds sales declined 16% to $271 million from $323 million in H1 2018. Rio Tinto's rough diamond production fell by 10% to 8.3 million carats during the first half of the year despite improved output in the second quarter. Output at the Argyle mine fell by 13% to 6.1 million carats in H1 2019. Rio Tinto's share of production at the Diavik mine in Canada (60% RT, 40% Dominion Diamond Mines) fell 1% to 2.2 million carats. The 2019 guidance is unchanged, with diamond production for the year expected to be between 15 and 17 million carats.