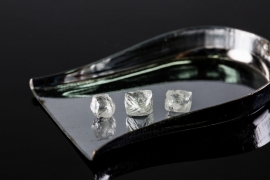 Canadian miner Mountain Province Diamonds has reported a 10% decline in output during Q2 from the Gahcho Kué diamond mine located in Canada's Northwest Territories. While Mountain Province mined 10.8 million tonnes of material during the quarter, 6% higher than the same period last year, a 9% decline in the recovered grade kept their overall recoveries down, but still ahead of plan. The miner produced 847,772 carats in Q2 (49% of the ouput shared with De Beers Canada). Diamond sales remained stable, particularly in the larger sizes (5 carats and up).

Gahcho Kué in Q2 yielded 1,730,147 carats at an average grade of 1.96 carats per tonne, which is 10% lower than in Q2 2018 (1,930,500 carats at 2.15 carats per tonne). The miner notes, however, that the production decline is the result of mining lower grade ore tonnes in Q2 2019: Mountain Province implemented a scheduled (and previously announced) shift in the source of ore feed to the Hearne and SWC Kimberlites, which yields lower grades in comparison to those from the 5034 Kimberlite. Their new recovery plan removes the very small, lowest value diamonds from the recovery process, which also lowers the total volume of recoveries.

In total, the volume of sales in Q2 fell by 3% to 1,077,730 carats from 1,113,724 carats a year ago, leading to a 7% decline in revenues to US$71.7 million from US$76.8 million in Q2 2018. The average value of $67 per carat dropped slightly from the $69 per carat achieved last year. "It is important to note," the miner says, "that the majority of the carats sold in Q2 2019 were from the Hearne and SWC kimberlites as per plan, which contain lower average values per carat than the 5034 ore body that made up most of the production in the previous year. The achievement of similar average values per carat sold year over year is very encouraging and can be attributed to the ongoing engagement with its JV Partner, De Beers Canada to focus on optimizing the process facilities recoverable size frequency distribution." They say they are "well positioned" for 2020 and beyond, as it plans to mine larger percentages of the 5034 Kimberlite.

Mountain Province adds that it is very encouraged by the results of its sales, which are conducted through Bonas tender house in Antwerp. Its year-over-year value per carat performance "demonstrate that the plant process changes are having a positive impact on the average value of the diamonds recovered. Considering that lower-quality ore was being mined, and in addition to a softer diamond market year over year, achieving similar average values per carat in Q2 2019 is very encouraging."

Company president and CEO Stuart Brown commented, "Despite the current market conditions, we are pleased to see our diamonds selling consistently at competitive prices.  With lower volumes being sold into the rough market of late, and the relatively positive retail sales reported, we expect to see price stability over the coming months." Mountain Province remains on track to achieve their 2019 forecast of 3.3 – 3.45 million carats (49% share of the full production) recovered.