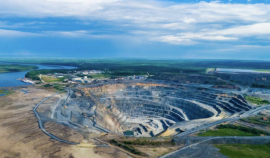 Russian diamond-mining giant Alrosa increased its rough-diamond output in Q2 and H1 2019, but the miner's sales have fallen to a low not seen since Alrosa started publishing monthly results in 2016 as rough and polished diamond market saw weak activity and very poor demand. Alrosa pointed to changing retail practices such as consolidation and increasing online sales as reasons for a reduction in polished diamond stocks across the retail sector. As businesses embrace more efficient stock management practices, cutters and polishers reduce the volumes of their rough diamond purchases.

Alrosa's Q2 sales declined by 25% y-o-y to $796 million, while their first-half rough sales declined by 32% compared to last year, falling to $1.8 billion from $2.6 billion. H1 production, meanwhile, increased 10% to 17.6 million carats. This decline in sales reflects Alrosa's implementation of a balanced sales strategy in an already-saturated market characterized by inconsistent demand. In terms of volume, Alrosa's Q2 diamond sales fell by 8% y-o-y to 8.3 million carats (6m carats gem-quality) and lost 22% from Q1 against the backdrop of declining demand due to already-bloated rough and polished inventories and continued difficulties faced by India's cutting business in securing affordable financing. During the first six months of the year, Alrosa sold 18.9 million carats, 16% fewer than in H1 2018.

In addition to lower sales volumes contributing to the decline in sales revenues, the average prices for gem-quality diamonds realised in Q2 2019, $130/ct, was 21% lower than in Q2 2018, though the price did increase 5% from Q1 as small-size diamond sales returned to normal (early 2019 saw a rise in the share of small-size diamond sales as the mid-stream were replenishing their stocks). The diamond price index in Q2 2019 is also down 4.6% year-to-date.

Alrosa's increase in diamond production in H1 2019 to 17.6 m cts was mainly driven by the launch of production at the Verkhne-Munskoye deposit in Q4 2018, increased output at the Udachny underground mine and a growth in ore processing at the Botuobinskaya pipe as operational efficiency initiatives scale up. Q2 diamond production grew 24% q-o-q (up 14% y-o-y) to 9.7 m cts primarily due to seasonal return to production at alluvial deposits.

Looking at the market, the miner says demand from jewelry consumers remains stable, which "bodes well for renewed activity and higher demand for rough diamonds closer to the end of Q3 2019 in the run-up to 2019-2020 Christmas sales season." It will still have to overcome the key driver of the current decline in demand, identified as global macroeconomic uncertainty due to escalating trade tensions between US and China and the depreciation of Chinese yuan against US dollar, resulting in lower purchasing power of Chinese consumers and tourists. Alrosa says that lower diamond demand "was also caused by the ongoing financing difficulties experienced by the cutters due to the banks tightening the loan security and repayment terms." Reports from India are that many polishers have lost their jobs as activity remains slow. All hopes will be pinned on the movement of polished goods as summer turns to fall and the holidays approach.