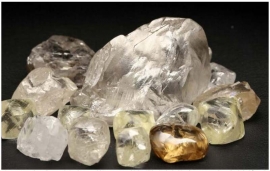 Lucapa Diamond Company is expecting to start turning an operational profit this year after achieving exceptional prices for its rough diamonds at its H1 tenders in Antwerp. The miner says it has also delivered on key operational goals at its Lulo (Angola) and Mothae (Lesotho) diamond mines in the June 2019 Quarter as well as in the first half of 2019. In H1 2019, the company recovered 20,504 carats and banked $US29.4m (AUS$41.9m) from sales.

Lucapa said its mining and processing operations at its 75%-owned Mothae mine in Lesotho continued to perform better than expected; while lower than in the first quarter, it ended up 20% ahead of plan on a half-year basis. Mothae produced 6,349 carats in the Quarter, bringing the first half output to 13,267 carats. The miner explains that this was due to the efficiency of the new 1.1 Mtpa plant and higher-than-planned recovered grades from weathered material, achieving 2.39 carats per 100 tonnes (“cpht”) for the Quarter and 2.42 cpht for H1 2019. They are currently dewatering the southern pit to provide access to higher-margin diamond zones in early Q3 2019, which they said will continue throughout 2019. Lucapa's large diamond recoveries during the Quarter included two +50 carat stones, including a 126 carat diamond, the largest gem-quality recovery from Mothae to date.

At their second diamond tender at the Bonas Group tender house in Antwerp, Lucapa sold a parcel of 7,008 carats from Mothae for $3.5 million, bringing to $7.3 million the total sale proceeds generated from the two tenders of Mothae diamonds completed in the first half of the year. Their third Antwerp tender is scheduled for July 2019 with a further export of diamonds for tender to commence late in Q3 2019. Meanwhile, diamonds from Lucapa's ultra-high value Lulo project in Angola achieved sales of US$10.0m in the prior quarter, resulting in an H1 2019 total of US$22.1m at an exceptional average price of US$3,668/carat. They also recovered an 130-carat stone, their 13th diamond larger than 100 carats recovered.

Production at Lulo totalled 3,868 carats, which was heavily down on the second quarter of the previous financial year. However, the company was positive on the outlook for Lulo. “Production for Q3 2019 and thereafter will be boosted by a new fleet of Volvo and Caterpillar earthmoving equipment, comprising six excavators, eight trucks and three bulldozers. This new fleet of earthmoving equipment has started arriving on site at Lulo,” it added. The Sociedade Mineira Do Lulo completed the sale of 5,573 carats of run of mine Lulo diamonds during the Quarter for gross revenues of US$10.0 million (A$14.5 million), representing an average price per carat of US$1,800. The sale completed during the Quarter also marked the launch of Lucapa’s diamond value-adding strategy, which aims to generate additional profits for Lulo production beyond the mine gate. Lucapa and its Lulo partners expect to announce further details relating to this cutting & polishing agreement in Q3 2019. SML will, in its own right, also export the 46-carat pink diamond held in inventory in Q3 2019 for cutting & polishing to maximise revenues.

Image: Mothae diamonds in the unsold inventory which will be included in the next tender scheduled for July 2019 (126 carat diamond centred)