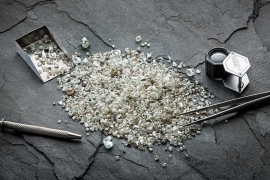 UK-based and AIM-listed junior miner BlueRock Diamonds on Monday announced it achieved record production at its flagship Kareevlei mine in South Africa during the second quarter of 2019. During the three-month period to June 30, the diamond miner produced a company record 3,516 carats, more than four-times greater than the 875 carats produced in the end of the second quarter in 2018.

The firm processed 78,759 tonnes of ore, a year-on-year increase of 130%, and said it achieved a record grade of 4.5 carats per one hundred tonnes of ore during the quarter. The company sold a 24.98 carat gem for a company record $190,000 at auction in June. The sale helped to boost BlueRock's average value per carat to $430.0, with total sales of 2,517 carats, up from 875 carats a year before. BlueRock noted that working hours at the Kareevlei mine recently were extended to 24 hours a day with 365 days of operations, adding that the longer operation hours enabled them to set a 40,000 tonne monthly production target - the current record of 34,000 was achieved in June - and is considering ways to production above that 40,000 tonne target.

Executive Chair Mike Houston said: "Whilst the management team is conscious that there are a number of milestones to reach if we are to bring real value to our shareholders, the improved grade and price per carat achieved in H1 2019 is a strong indication of the potential of the Kareevlei resource.
"The immediate impact of the new team gives us confidence in our ability to take production to the next level." Houston also said that he expects the company to be profitable in the second half of 2019, after it made a pretax loss of GBP2.4 million in 2018 on a revenue of GBP1.4 million in 2018. Shares in BlueRock were up 5.0% at 0.10 pence in London on Monday morning.