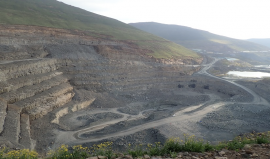 Firestone Diamonds today announced its 75%-owned subsidiary Liqhobong Mining Development has received a waiver from ABSA Bank for certain of its covenants measured as at 30 June 2019 in terms of the $82.4 million facility agreement, with the support of its bondholders. The next measurement date will be 30 June 2020. Firestone notes that despite a strong performance from its mining operations at costs below budget, the recovery of several higher value diamonds at the Liqhobong Mine during the 2019 financial year and solid prices achieved in Q3, the decline in average prices for smaller goods has dented its earnings and necessitated relief from its covenants.

The company says that while they realized an average value for the third quarter of $80 per carat, the average value realised for the three quarters ended 31 March 2019 remained below expectation at $74 per carat. "The lower average value was impacted mainly by lower prices realised for the smaller, lower value goods, which has also affected many other diamond mining companies and the wider diamond industry." They explain that ertain of the ABSA covenants are forward-looking and require forecast assumptions to be made. However, in light of the current pricing climate, Firestone used lower average dollar-per-carat values in these covenant calculations, which has adversely affected the covenant measurement and given rise to the need for waivers in respect of two of the six covenants. Despite these factors, the mine continued to generate positive cash flows after finance costs and continues to be in a strong liquidity position with a cash balance of $26.2 million as at 30 June 2019.

Paul Bosma, Chief Executive Officer, commented: "We are grateful for the strong support we have received from ABSA, the ECIC and our Bondholders in what is a tough period for the smaller stone segment of the diamond market. Operations continue to perform well, and we aim to ensure that we remain in a strong position to benefit from an improvement in the pricing environment in the future."