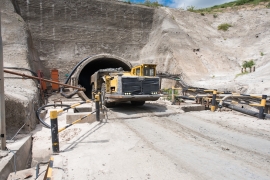 Gem Diamonds has sold its Ghaghoo mine in Botswana to Pro Civil, a local company, for $5.4m (R77m), bringing to an end Gem's struggles with the underground mine that never lived up to its expectations. Pro Civil, a company registered in Botswana, will acquire Gem Diamonds Botswana Proprietary and the Ghaghoo mine, which has been on care and maintenance since March of 2017.

Gem Diamonds invested more than $90 million in building the Ghaghoo mine in an attempt to diversify away from its Letšeng mine in Lesotho, but it was unable to deliver on its promise as the low prices received for its output of smaller rough diamonds made it economically unviable to continue operating. In March 2017, Gem reported a $170m impairment against Ghaghoo after mothballing the mine in the Central Kalahari Game Reserve in February, the low prices pushing the operation into a loss. The mine has a resource estimate of about 20 million carats (indicated and inferred resource) and was expected to produce 200-220,000 carats annually, but by 2016 the writing was on the wall. Gem Diamonds had expected the diamonds mined at Ghaghoo - which officially opened in September 2014 - to earn between $240-270 per carat, but by 2017 the prices Gem was realizing were almost 50% lower, earning an average price of only $142 per carat by December 2016.

Ghaghoo, the first underground diamond mine in Botswana, was a difficult mine to build. A decline shaft was sunk through an 70m-thick layer of loose Kalahari Desert sand in a remote location in the north of the country. Part of the reason to go underground, instead of building an opencast mine, was to reduce the size of the mining footprint in the game reserve to 20km² instead of 100km². The mining project started in October 2011 and did not come close to reaching commercial production of 150,000 carats a year. No indication has yet been given about what Pro Civil intend doing with Ghaghoo once the deal closes in the third quarter of 2019.

"This sale is in line with our strategic objective to dispose of non-core assets. Gem Diamonds remains focused on optimising production and efficiency at the Letšeng mine in Lesotho," said Clifford Elphick, CEO of Gem Diamonds, adding the $5.4m would be put towards “general corporate purposes”. It might be needed, given that large-diamond recoveries at Letšeng this year have not replicated last year's success. In the first half of 2019, Gem recovered only two stone greater than 100 carats as compared to 10 in first half 2018. The slower pace of large-diamond recoveries actually commenced after Gem's tremendous H1 of 2018. Letšeng is the world’s richest diamond mine when measured by dollars achieved per carat, consistently delivering large, high-quality diamonds.