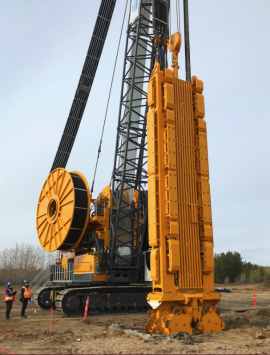 Rio Tinto Exploration Canada (RTEC) has completed the drilling of the first bulk sample hole on Star Diamond Corp.'s Star Kimberlite, employing a massive 'trench cutter sampling rig'. The first of 10 bulk sampling holes has been drilled to a depth of over 228 metres and intercepted a total of 117 metres of kimberlite on Star Diamond’s Star-Orion South site at Fort à la Corne. A total of 704 bulk bags ('cubes') of kimberlite were extracted and will be stored for analysis, along with the rest of the large samples to be drilled in the coming months, until the on-site bulk sample plant has been assembled and commissioned. The final diamond recovery will then be conducted by RTEC at a secure off-site facility.

"The completion of the first trench cutter hole of this bulk sample program is an important milestone in the evaluation of the Star Kimberlite by RTEC," said Senior Vice President Exploration and Development of of Star Diamond Corporation, George Reed. He said the use of trench cutter sampling rig technology to recover the kimberlite bulk samples "has the ability to revolutionize future bulk sampling and mining of kimberlites, particularly kimberlites characteristic of the Fort à la Corne diamond district of central Saskatchewan, Canada."

Star Diamond Corporation is a Canadian based corporation engaged in the acquisition, exploration and development of mineral properties. The Corporation’s Fort à la Corne kimberlites (including the Star - Orion South Diamond Project) are located in central Saskatchewan in close proximity to established infrastructure, including paved highways and the electrical power grid, which provide significant advantages for future mine development.