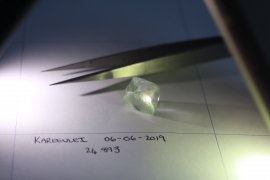 BlueRock Diamonds plc, the AIM-listed junior mining company which owns and operates the Kareevlei Diamond Mine in the Kimberley region of South Africa, has recovered its largest diamond to date: a 24.98 carat gem-quality stone. The miner’s largest diamond prior was 16.28 carats, which sold for $78,947. BlueRock's shares jumped 15% on the news published June 7, but the gain was short-lived, having receded to its level prior to the fiind. Update - The 24.98-carat rough diamond sold for for $190,000, representing an average price of $7,606 per carat.

“This record recovery of such a high-quality diamond is an exciting milestone and underpins why we are so confident about the potential of the Kareevlei mine," said executive chairman Mike Houston in a statement. "We have a comprehensive development plan to increase production and I look forward to providing further updates as we progress.” The diamond will be put to tender, the results of which will be announced June 17, the company said. In the first quarter of 2019, BlueRock processed 42,409 tonnes of ore, yielding 1,847 carats at 3.41 cpht that sold for an average of US$371 per carat.

The Kareevlei Diamond Mine near Kimberley in South Africa which produces high-quality, high-value diamonds. The licence area covers 3,000 hectares and hosts five known diamondiferous kimberlite pipes. As at November 2018, it was estimated that the remaining Inferred Mineral Resource from the four kimberlite pipes (KV1, KV2, KV3 and KV5) represents a potential inground number of carats of 367,000.