Stornoway on the Ropes: Looking for Buyer or Major Investment 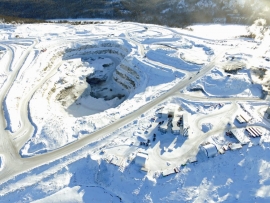 Stornoway Diamond Corp., 100% owner and operater of the Renard Diamond Mine in Quebec which began commercial production in January 2017, is in dire financial straits and is looking for new investment in, if not a buyer for the mine and its assets. Stornoway has endured some very turbulent times over the past year and a half, seeing its losses mount as a result of operational difficulties and a highly unfavorable market for its diamonds, and will need to restructure if it is going to continue operations.

In a press release issued Tuesday June 11, the miner announced that it had secured C$11.7 million (US$8.8 million) in bridge financing - a loan to get them through the next three months - so it can continue to operate the mine while it continues its strategic review process aimed at ensuring the long-term viability of the mine. It has also launched a formal 'sale and investment solicitation process' (“SISP Process”) to seek out proposals for a restructuring transaction "that would involve an investment in, or the acquisition of all or substantially all of the property, assets and undertakings of Stornoway and its direct and indirect subsidiaries." In other words, it has until September 16 when the bridge financing reaches maturity to either find a purchaser or sufficient investment finances to pay off its debts.

Stornoway struggled through its first year in 2017 - despite a strong performance in carat production, processing and cost - in part due to the issue of diamond breakage during processing and “a lower diamond price environment than was originally forecast". The company started transitioning production from its open pit to its underground mine in the first half of 2018, but suffered continuing losses during the transition, as 2018 production, sales and revenue all declined significantly from the miner's 2017 levels. The challenges included delays in the ramp-up of the Renard 2 underground mine, the processing of low-grade stockpiles during the transition and weak diamond prices. The result was an annual loss of US$246.8 million (CA$329.4 million), substantially widening the loss of US$85.6 million (CA$114.2 million) recorded in their first year of production. In November 2018, Stornoway announced that Matt Manson would step down as President and CEO, and was succeeded by Mr. Patrick Godin on January 1, 2019.

Adding to Stornoway's woes has been a persistently weak market, particularly for the smaller diamonds typical of Renard's production. In Tuesday's press release, Stornoway reiterated that, "The performance of the Corporation’s business has been significantly impacted by the significant drop in the price of diamonds in world markets. The global diamond market is going through a difficult time and Stornoway’s mine sells its product at a lower price than in previous years and much lower than initially anticipated during the construction of the mine. A continued downward pressure on the market price for rough diamonds has inhibited the Corporation’s ability to generate positive free cash flow in 2019. Such events or conditions cast significant doubt about the Corporation’s ability to continue as a going concern."