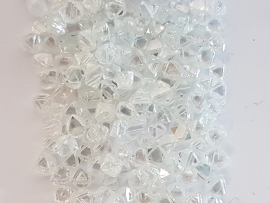 Newfield Resources has received the green light to commence development of the Tongo Kimberlite Project (Tongo) in Sierra Leone, which will become the world's newest diamond mine which is expected be operational in 2020. Confirmation of the plans to develop the mine came in the form of the recently completed postive Front End Engineering and Design (FEED) study, establishing probable reserves at just over one million carats of diamonds at 100 cpht, with a Final Investment Decision (FID) expected in Q3 2019. The project is fully permitted, with the environmental, mining and social licences in place, and thus it is ready to go, the company announced in a May 2019 investment research report. Some site operations have already commenced. The first blast on what will become an underground mine is planned for this week. Newfield will markets its diamonds in Antwerp.

The 1.1 million carats of initial ore reserve, however, is just the baseline, representing only two of the eleven recognized kimberlite dykes. Newfield has already published its case for significant upside to the base reserve, with total indicated and inferred resources now at 7.4 million carats at a grade of 250 cpht and a diamond value of $194 per carat, with only four of the 11 kimberlites drilled to resource level (230m depth). The company is planning for an initial eight-year life of mine with peak annual diamond production of 260,000 carats achieved in year five. The first carats are expected within 12 months of the first decline blast this week. The grade and the value combine to give an average value of over $500 per tonne of ore, which is one of the highest for kimberlites worldwide.

Newfield has also published a significant exploration target with a range contained diamonds of 3.7 to 20.8 million carats. The company's strategy is to progessively increase and upgrade its resources through drilling in parallel with operations. The resource base, together with the exploration target underpin the potential of Tongo to be a long-term mine, particularly considering the four of the 11 kimberlites have yet to undergo an initial assessment.

Executive Director Karl Smithson has called Tongo a 'generational asset', with a solid baseline, a relatively high grade of high value diamonds and the potential for large-scale production and life expansion. In an interview with The Diamond Loupe in January, Smithson described their product as "typical Sierra Leone. It is high quality, white gems, nice shapes, D to G colors, with a high percentage of collection goods … it’s a nice product. It has very little in terms of industrial or rejects. Almost purely gem. It’s not the largest mine in the world, but it is going to be a mine that has good volumes of production for a company of Newfield’s size, and with a good margin as well." Adding to the company's confidence is the relatively low capex, with an estimated up-front capital of $29.4 million. The company was able to keep the costs low by refurbishing a 50 tonnes per hour processing plant provided by Octea. Operational expenditures are also expected to be low, which should facilitate financing.