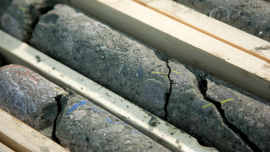 Mountain Province Diamonds has discovered a new kimberlite at its Gahcho Kué Joint Venture (GKJV) leases, the company announced today in a press release. The Wilson kimberlite - named after Alice Evelyn Wilson (1881-1964), who is officially recognized as Canada's first female geologist - is located roughly 200 meters east of the Tuzo kimberlite and was discovered during drill testing of geophysical and geological anomalies in the area. It is the first kimberlite to be discovered in the GKJV area in over 20 years, and it lies well within the open pit mine plan for the Tuzo kimberlite, though the miner says Wilson shows no connection to the nearby Tuzo, and as such the Wilson kimberlite is a distinct, new discovery.

The Wilson kimberlite was discovered during an exploration drilling program that was designed to conduct drill-testing of geophysical and historical drilling anomalies in the area surrounding the Gahcho Kué kimberlites. Representative samples of the core gathered from discovery drillholes were shipped to the Geoanalytical Laboratories Diamond Services of the Saskatchewan Research Council for recovery of microdiamonds. A total of 115.2 kilograms of kimberlite was treated for microdiamonds, with 480 diamonds recovered in the +0.075mm size classes. Five +0.85mm diamonds included in the result weigh a total of 0.32 carats, with the largest stone being a 0.28 carat colorless octahedral aggregate. The drilling and microdiamond data for the Wilson kimberlite are not sufficient to define a Mineral Resource, and as such the Wilson kimberlite is considered a Target for Further Exploration (TFFE). Based on drilling and 3D modeling to date, a potential range from 1.5-3.0 million tonnes is possible for the Wilson kimberlite. The estimate of a TFFE is conceptual in nature as there has been insufficient exploration to define a Mineral Resource, and it is uncertain if future exploration will result in the estimate being delineated as a Mineral Resource.