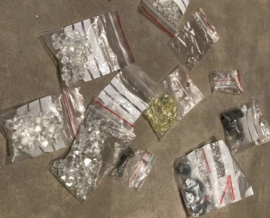 Russian police uncovered around $3 million worth of stolen diamonds, and over $2.5 million in cash, at the homes of a criminal ring operating inside state-controlled diamond producer Alrosa, authorities said on Monday, reports Reuters. Alrosa confirmed that security services had uncovered an ongoing diamond theft ring in its sorting and grading department, with someone on the inside faciliating the larceny. The authorities detained a woman (Elena Kanunnikova), the Alrosa employee said to be in charge of the embezzlement, a mediator, and another man said to be responsible for selling the stolen goods. All three have been arrested.

Russia’s Investigative Committee said in a statement that three suspects have been placed in custody by a Russian court. “Alrosa completely confirms information from Russia’s FSB (security service) about the interception of an extensive scheme to steal rough diamonds in the company’s United Selling Organisation,” Alrosa said in a statement, referring to its valuation and sales department. The employee was caught as she attempted to steal another batch of diamonds worth over 22 million roubles ($340,000), investigators said. During the course of their subsequent investigation, investigators found a cache of 500 rough diamonds including 11 diamonds worth $3 million, more than $2 million and €500,000 in cash, as well as jewelry products of famous brands, including 30 diamond-encrusted watches, according to Crime Russia.

A video shared by the Investigative Committee (authenticity unconfirmed) shows a safe containing jewelry and large amounts of cash in various currencies, with multiple parcels of rough diamonds on display. Another video purportedly shows the apprehension of the suspects. The court ordered that the three suspects be held in custody while the investigation continues. “A few years ago the company announced its focus on rooting out corruption cases. This focus will be continued,” Alrosa said in its statement, adding its own security team had been involved in the investigation. a woman being apprehended while exiting a building,

Photo: Plastic bags with diamonds seized during an investigation. Undated photo released June 10, 2019 by The Investigative Committee of the Russian Federation to Reuters.