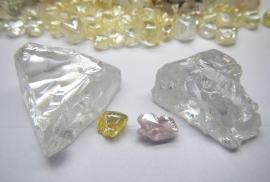 Lucapa Diamond Co. yesterday formally annouced the launch of the next exploration phase to locate the kimberlite source of the high-value alluvial diamonds at the Lulo project in Angola. The next 12-month program is based on an extensive technical review of Lulo kimberlite exploration results to date, including those of the extensive 2018 drilling program which confirmed a further 70 kimberlites within the Lulo alluvial diamond field, which increased the total known kimberlites within the concession to more than 100.

In addition to 5,000m3 of bulk samples of alluvial gravels that the miner will excavate from six major tributaries feeding into the Cacuilo River upstream of Mining Blocks 8 and 6, they have identified 16 Lulo Project kimberlites for further testing in the Lulo diamond field. These kimberlites have been rated as the most prospective to host diamonds. The statement says that this drilling will help define the structure and surface area of each pipe, including surface volcaniclastic kimberlite material for later bulk sampling. Eight additional kimberlite targets will be drilled in the next phase, including anomalies highlighted in the technical review demonstrating reversely polarised magnetic signatures.

Lucapa Managing Director Stephen Wetherall stated: “The next phase of the kimberlite program builds on the great body of exploration work completed over many years at Lulo to pin-point the source pipes hosting the world’s best alluvial diamonds. Like the diamond experts involved in our recent technical review, we remain convinced that the kimberlite source of these diamonds awaits discovery beneath our prolific alluvial diamond field.” As he readily admits, however, knowing the source is there is one thing, but finding it something else entirely. When we asked Mr. Wetherall last autumn if there are indicators that they are getting close, he replied, "The honest answer is, if we knew, we would have it. But certainly, regarding the indicators you mention, they are really exciting and off the charts compared to other exploration projects. We have recovered approximately 800 diamonds of +10.8 carats and above on top of our kimberlite targets at Lulo. So, what are the chances of the kimberlites being diamondiferous? Very, very good."

Two weeks ago at the 2019 Annual General Meeting, Non-Executive Chairman of Lucapa Miles Kennedy explained to the company's shareholders the board's thinking behind investing their own funds in the exploration progam, at a budgeted cost of US$3.3 million. As in the past, Lucapa will fund the exploration costs from a portion of its returns from Lulo alluvial mining company Sociedade Mineira Do Lulo, a future-oriented policy that has left some shareholders disappointed. "Some shareholders," he said, "are of the view that despite spending many years and many millions of dollars on our kimberlite exploration program, we are no closer to finding the mother lode at Lulo. We hear that, loud and clear. But as someone who has spent decades in the diamond industry, I am firmly of the belief that we should continue our kimberlite exploration for the duration of the licence we have been granted."

"To me, the main game in Angola for many years has been to find the kimberlite diamond pipe or pipes which, about 100 million years ago, erupted within our Lulo concession, and in doing so shed the world’s most valuable alluvial diamonds down into the terraces we mine today," he continued. "And while kimberlite exploration can by nature be painstakingly slow, I am equally of the view that we are closer than ever to finding the mother lode at Lulo. There are no silver bullets in the kimberlite exploration game either. But the patient and methodical approach adopted by our exploration team is narrowing down and confining the search areas of our quest. It may take us another couple of years, but I am more confident than ever that we can indeed find the diamond source at Lulo. And for the reasons I have outlined, that has the potential to be a discovery of huge wealth. We can certainly look at funding alternatives for this program, but now is not the time to deviate from that path or to give up."