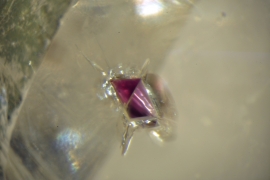 A new discovery has the potential to change how we look for diamonds in Canada and around the world, write Katie Willis from the University of Alberta, Canada. This comes as potentially big news to an industry that has discovered scant few significant and economic diamond deposits in the past decade.

Lherzolite, a common rock type in Earth’s mantle that has only been peripherally associated with diamond formation, but collaborative research between University of Alberta geologists and industry partner De Beers Group highlights the value of lherzolite for diamond exploration. "Previously," Willis writes, "diamonds in ancient continental regions, such as the Canadian Shield, were thought to have grown mainly in different types of mantle rocks. This assumption, which has guided exploration for decades, is now being turned on its head," with lherzolite becoming the third mantle source rock for diamond deposits.

Thomas Stachel, a professor in the Department of Earth and Atmospheric Sciences and Canada Research Chair in diamonds, said, “The outcome of the project fundamentally changes our understanding of where diamonds come from. The discovery that economic diamond deposits can come from lherzolitic diamond substrates has the potential to cause diamond companies to retool their approach to exploration.”

The research used samples from the De Beers Group Victor Mine, located in the James Bay region of northern Ontario, and Stachel says the results from those samples may apply to other regions around the world that experienced geologically ‘young’ overprint, in particular in Western Canada. “In the long run, this could make a big difference in diamond exploration,” facilitating the search for diamond-bearing deposits.”