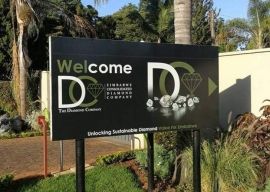 The Zimbabwe Consolidated Diamond Company (ZCDC) board of directors has fired seven senior officials as it seeks to rebuild public and market confidence following allegations of rampant corruption and abuse of office by the executive, Zimbabwe newspapers reported yesterday. Chief Operating Officer Roberto De Pretto, a South African mining veteran who spent the majority of his career at De Beers and Anglo American before becoming COO at Diamcor and then ZCDC, will take over as acting CEO from Morris Mpofu.

In a statement, ZCDC board chairman Engineer Killian Ukama confirmed that, "in line with the prevailing operating environment and the need to rebuild public and market confidence," the board has terminated contracts of employment for seven executives including: the CEO, CFO, supply chain executive, chief HR executive, chief security officer, the engineering executive and the audit executive. "The ZCDC Board would like to reassure its stakeholders and partners on its continued commitment to strengthen its systems and processes for business continuity and realisation of its vision to become a world class diamond producer."

Outgoing CEO Mpofu on Wednesday appeared before a Harare court facing charges of criminal abuse of office after having allegedly recommended a blacklisted diamond buyer, once arrested for smuggling diamonds, to purchase diamonds. Prosecutor Moses Mapanga alleged that in March, Mpofu recommended Robal Hussein be allowed to buy diamonds from Minerals Marketing Corporation of Zimbabwe (MMCZ), knowing that he was an ex-convict and blacklisted under the Kimberly Process Certification Scheme (KPCS). Hussein and Youssef Osseily were arrested on September 20, 2008 in India for smuggling rough Zimbabwe diamonds; they were convicted and sentenced to four years imprisonment. On March 26 this year, allegedly on the recommendation of Mpofu, Hussein attended a diamond tender at MMCZ representing a Lebanese company, Diamond Cut. It is alleged that Hussein bought three diamond parcels weighing a total of 360 carats for nearly $260,000.