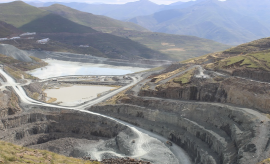 A mechanical breakdown and the mining of a lower grade area of the Liqhobong Diamond Mine in Lesotho led to a signficant production decline for Firestone Diamonds during the quarter ended 31 March 2019 (Q3 of tFY 2019), but revenue rose on a rebound in the average price per carat and the sale of high value stones.

Firestone's carat production declined by 19% year-over-year and 31% from Q2 to 155,206 carats. The company treated only 1% fewer tonnes of ore compared to Q3 2018 and 2% fewer tonnes compared to last quarter, but the recovery grade fell to 18 carats per hundred tonnes (cpht) from 22.2 cpht a year ago and 25.4 cpht last quarter. The miner explained that the fewer tonnes treated resulted from a mechanical breakdown which occurred at the beginning of January, which is a particularly difficult time of the year to mobilise repair teams. Also, most of the mining during the quarter took place in the lower grade northern part of the pit. During the quarter, the company recovered 64 special stones (over10.8 carats) compared to 89 in Q2. CEO Paul Bosma said, "During the final quarter of the year, mining will return to the higher grade, southern part of the pit. Waste stripping is accelerating according to plan and we achieved our highest ever monthly tonnes moved in March."

Firestone's revenue was down 5% on an annual basis, but surged by 21% to $16.8 million from $13.9 million in Q2, due not only to an increase in the volume of carats sold to 211,368 carats from 191,735 carats, but also to a rise in the average price per carat to $80 from $72 per carat. The $80 per carat achieved in Q3 2019 is back in line with the $81 per carat earned in Q3 2018. During the quarter, they recovered the most valuable stone to date at Liqhobong, a 70 carat white diamond which was sold in March. A number of other high value stones were also sold during the quarter, including a 46 carat white diamond. This, along with signs of recovery in prices realised for the smaller, lower value goods, is encouraging. "[I]t was pleasing to see an increase in average diamond value which resulted in improved revenue for the quarter," said Bosma. "Besides continued strong demand for our special stones, it was also encouraging to see a modest increase in pricing for the smaller, lower value goods at the March sale," conducted First Element tender house in Antwerp.

Firestone also reports the notable recovery of a 72 carat yellow, makeable diamond, a 22 carat makeable white diamond and an 11 carat fancy light-pink diamond, which occured after the close of the quarter. All these stones will go on sale at the upcoming tender in early May. Firestone till on track to meet its FY2019 guidance and the mine continued to generate positive cash flows after finance costs, with net cash as at 31 March 2019 of US$29.9 million (Q2: US$26.2 million).