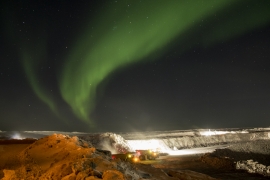 Mountain Provice Diamonds recorded a 3% year-over-year drop in recovered carats at the Gahcho Kué Diamond Mine during Q1 2019 despite a 11% increase in tonnes of ore treated, as the average recovered grade slipped by 13%. Rough diamond sales also fell by 12% as a result of a 28% decline in the average price per carat sold, offsetting the larger volume it marketed through Bonas tender house in Antwerp.

Stuart Brown, the Company's President and Chief Executive Officer, commented: "we have had a solid start to the year with our Q1 sales and production results slightly ahead of our expectations. We remain on track to achieve our 2019 target of 3.3 – 3.45 million carats (our 49% share of the full production) recovered, which together with the improving diamond market and the planned plant enhancements will translate into a better operating margin." The miner shares its production and sales with JV Partner DeBeers Canada (51%). The GK Mine remains on track to achieve it's 2019 production guidance of 6.6 – 6.9 million carats.

The decline in production was in line with, and even exceeded expectations for the quarter. Mountain Province mined just over 9.5 million tonnes of material during the first quarter, 16% higher than the same period last year, albeit at a lower average grade than in the past few quarters. The JV treated 870,949 tonnes of ore, an 11% increase on comparable quarter (Q1 2018: 786,000 tonnes). This led to the recovery of 1,584,552 carats (776,431 carats was their 49% share) at an average grade of 1.82 carats per tonne, slightly lower than the same period last year and mainly as a result of planned mine sequencing and lower grade ore tonnes treated during the quarter (Q1 2018: 1,641,000 carats and 2.09 carats per tonne).

In addition to mining a lower grade area of the mine, the production decline also reflects the impact of the initiatives to increase plant performance by increasing sieve size cut offs. As stated previously, Mountain Province and its JV Partner DeBeers Canada are in the early stages of implementing changes in the plant which will result in higher throughput in tonnes treated by increasing sieve sizes to accommodate the recovery of larger and higher quality stones at a faster pace. This in turn will cause the grade to be slightly lower than previously reported as the lower quality and smaller stones will be eliminated from the recovery process.