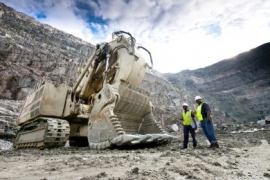 De Beers Group reported a diamond production decline in the first quarter of 2019 driven by a 65 reduction in South Africa as the Venetia mine as it approaches the transition from open pit to underground mining. Venetia yielded only 0.4 million carats due to lower mined volumes, while the Voorspoed mine was placed onto care and maintenance in Q4 2018 in preparation for closure. De Beers' production guidance for 2019 remains unchanged at 31 - 33 million carats, subject to trading conditions.