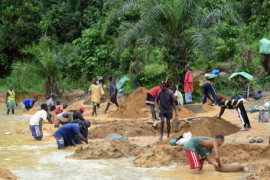 The Diamond Development Initiative (DDI) yesterday launched the Maendeleo Diamond Standards (MDS) an innovative certification system that enables an ethical production of diamonds by artisanal and small-scale mining operations, through the adoption of standards and best practices. It marks the first comprehensive approach to artisanal diamond mining, which have been hindered by the complexity, informality and opacity of the sector. The adoption of the MDS is a milestone in the history of artisanal diamond mining, promising respect for human rights, environmental sustainability, better prices for artisanally-mined diamonds, all of which should provide a significant boost to consumer confidence.

Maendeleo is a Swahili word meaning development and progress. The MDS Certification System is more than a set of rules, however; it is a unique effort to support artisanal diamond miners and their communities. The idea is not just better prices for artisanally mined diamonds, but a system of legalized mining operations that respect human rights, health and safety, and support environmental sustainability. "Standards provide credible assurances to consumers and they are long overdue for the Artisanal and Small scale Diamond Mining (ASDM) sector," said DDI Executive Director Dorothee Gizenga. "MDS enables commercial entities to ethically source diamonds from artisanal and small-scale operations, while also supporting miners and their communities to ensure their inclusion in a broader system of responsible supply chains."

The MDS are made of eight specific principles covering legality, consent and community engagement, human and worker's rights, health and safety, violence-free operations, environmental management, interactions with large-scale mining and site closure. Each of these principles is comprised of provisions defined by measurable requirements, concrete performance criteria and a list of acceptable audit evidence.

The DDI developed the MDS in consultation with a wide range of stakeholders, including governments, industry, local civil society organizations, as well as artisanal and small-scale diamond miners in four countries of Africa and South America. DDI then conducted pilot projects in Sierra Leone in 2012 and 2013 to field-test the system, and in 2014 the pilot was expanded into a full program. The standards have received broad acceptance in Sierra Leone, and they're now ready for implementation across the ASDM sector. "Artisanally mined diamonds are major sources of livelihoods for more than 1.5 million miners working in 18 countries in Africa and South America, supporting as many as 10 million family members," added Gizenga.

Diamonds mined by artisanal and small-scale operations represent almost 20% of the global industry's annual output by volume. However, the DDI says, artisanal miners typically earn less than $2 a day. They often work illegally and under terrible conditions; violence and child labour are common, and environmental damage is endemic. Maendeleo diamonds are artisanally mined in conflict-free zones and produced safely in consenting and engaged communities, through violence-free operations with respect for human and worker rights using practices that promote environmental responsibility.