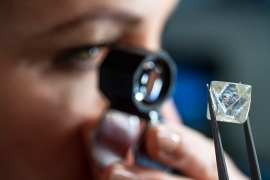 "Meet Argyle Octavia" writes Rio Tinto on its Twitter account, referring to a rare 28.84-carat diamond discovered at the Argyle mine in east Kimberley, Western Australia. Named for her octahedral shape, the Argyle Octavia is one of the largest gem quality white diamonds ever found at Argyle, and may be one of the final significant finds from the famous diamond mine, which is scheduled to close in 2020. The 28.84-carat stone was discovered in March and will be sold by tender in Antwerp later this year.

Arnaud Soirat, chief executive of Rio Tinto's Copper and Diamonds portfolio said "We are delighted with this discovery which is a testament to the extraordinary Argyle orebody that continues to deliver these miracles of nature, even as it nears the end of mine life." Rio Tinto's Argyle diamond mine, operating since 1983, is renowned as the world's largest producer of colored diamonds - the famous Argyle pinks, reds and purples fetch extraordinary prices - with a much more sporadic production of large white diamonds. Since commencement of the mine in 1983, gem quality white diamonds greater than 20 carats have comprised around 0.00007 percent of Argyle's production.

Andrew Wilson, General manager of Argyle Diamonds said "Argyle Octavia is unique in its size, shape and beautiful provenance and will take its place in Argyle’s history as one of a few special large white diamonds ever to be produced from the mine. We've probably seen 20 of those in the last 36 years of operations, of the plus-20-carat size." He adds, "It will go to Antwerp, and through our auction process, and the market will determine its value," adding that the diamond would be sold as a rough stone. He told ABC News it was rare for a stone this size to even survive the mining process intact. "To find one that gets all the way through our crushers, and all the way through the sorting process, out to where we retrieve it … it's quite unusual for it to be able to come out a fully formed diamond," he said.